“Movement beyond sitting at my desk just recharges my batteries and gives me time to think beyond just stuff on the internet. You don’t find your own voice admiring other people’s experiences.” 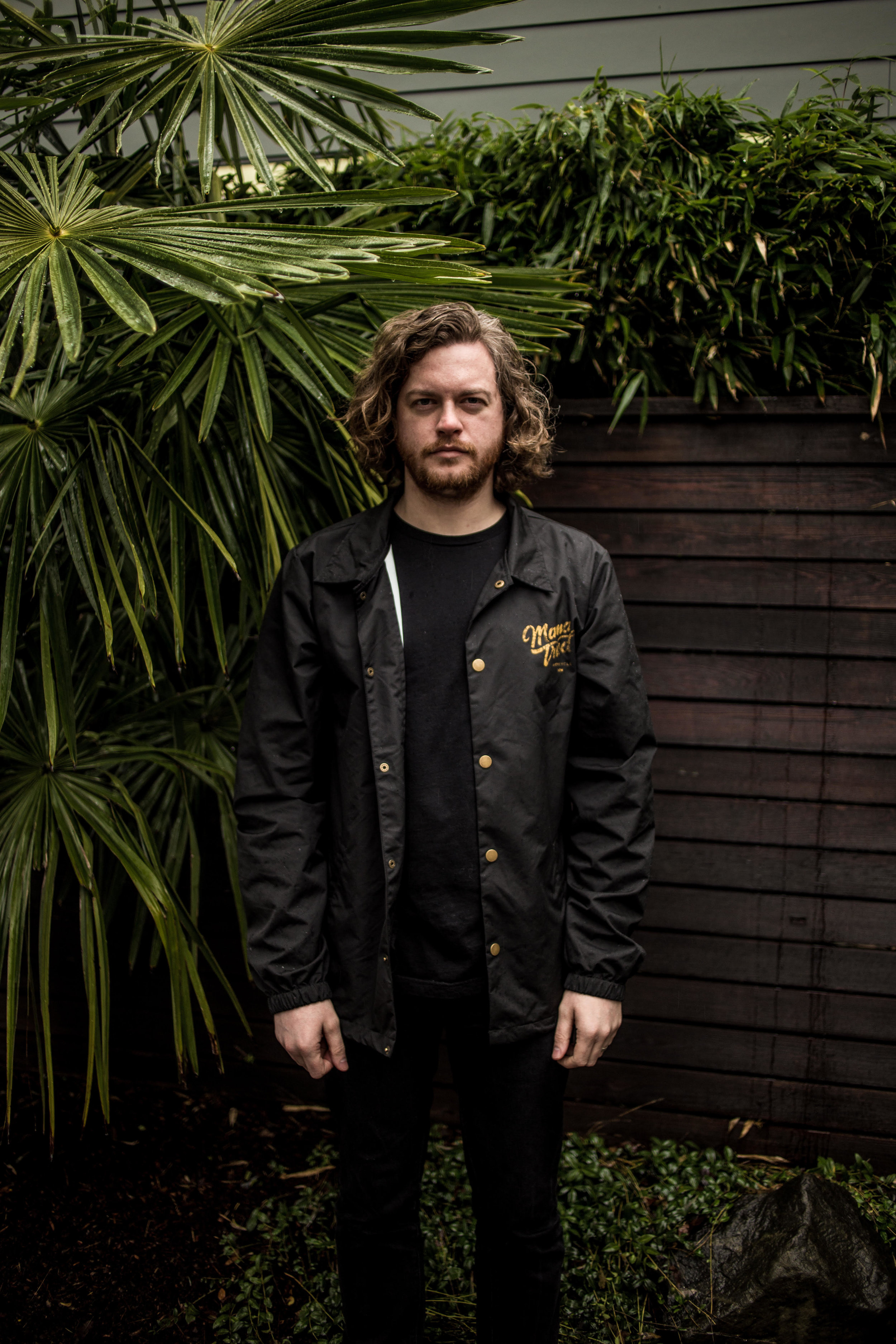 Hello Brett!
How would you describe yourself – who is Brett Stenson?
I think I rewrote this response 4 times, but I suppose most others would describe me as a weirdo silly guy who draws a lot. I work at Jolby & Friends as an art director in Portland, but I am initially from Wisconsin where I lived most of my life after moving around with my military dad the first half of my life. My favorite things are the outdoors, riding things with two wheels, ancient art and history, music, more music, and nerdy stuff like playing Magic The Gathering and video games. Definitely a workaholic, but trying to work on slowing down overall. Most of all, I’m just drawn to unusual stuff, whether it be crazy weird music, type that’s almost ugly in how weird it looks, drawings that look like a lunatic drew them, food that’s super bizarre, etc. I’m a big fan of people stepping out of the norm and running full on into the unknown. 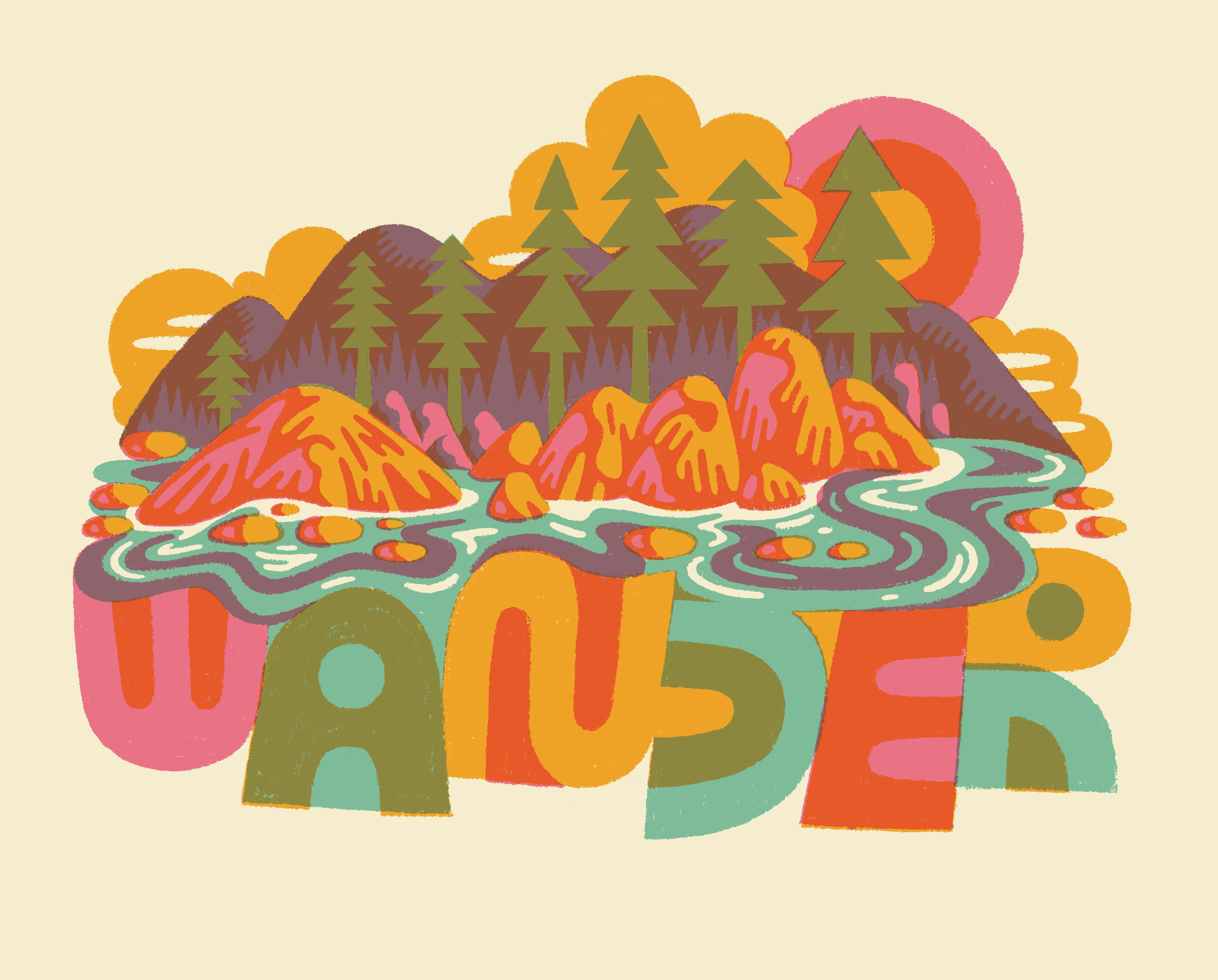 How and when did you discover you wanted to be an illustrator?
I would say most credit of finding that out goes to my friend Micah who basically convinced me to switch from Industrial design to Illustration the day of registration at MIAD where I went to college in 2005. Even though I drew my whole life, I never really knew there was an option to draw for a living – it seemed like an impossible feat only the luckiest lottery winners could do. Maybe that’s the Midwest and it’s tough, no-frills attitude about being a hard worker – but also shout out to my high school art teachers for showing me what art school was. Due to my love of cars and such as a kid, ID seemed like the right path to both draw but also design cars. However after the first year, my friends realized “you’re probably too weird to do ID and you can draw characters – why not just do illustration?” So, thanks Micah – had no idea how critical that moment would be until years later.

Why do you do what you do? If you weren’t doing this, what would you be doing?
I mostly do it because it’s super fun and feels like my most fluent way of expressing who I am or what I am interested in. Another reason would be because I did it most of my life, so I had a lot of reps and practice doing it which made me primed to get more into it as an adult. But if I could choose a parallel life, I would probably be a carpenter or woodworker. 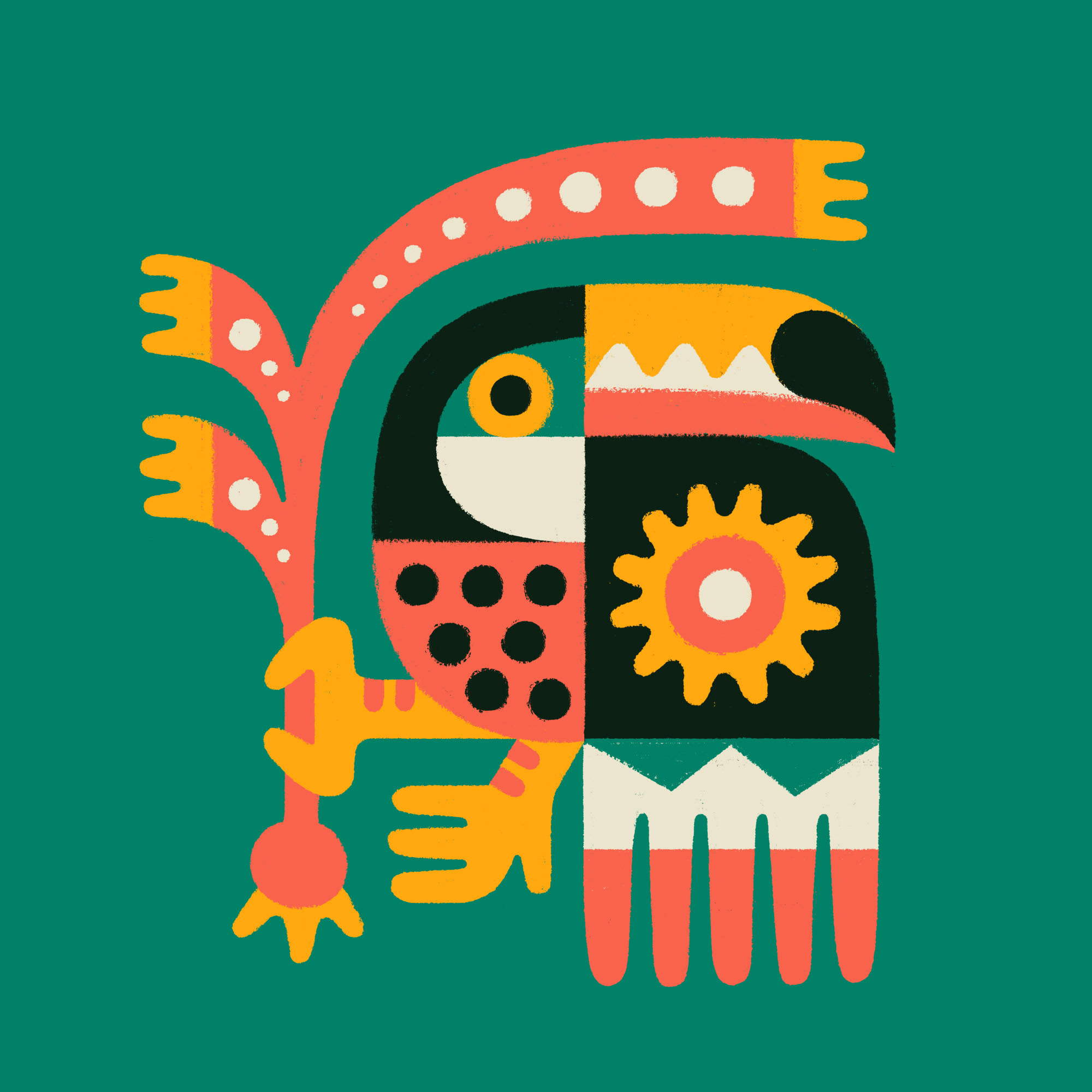 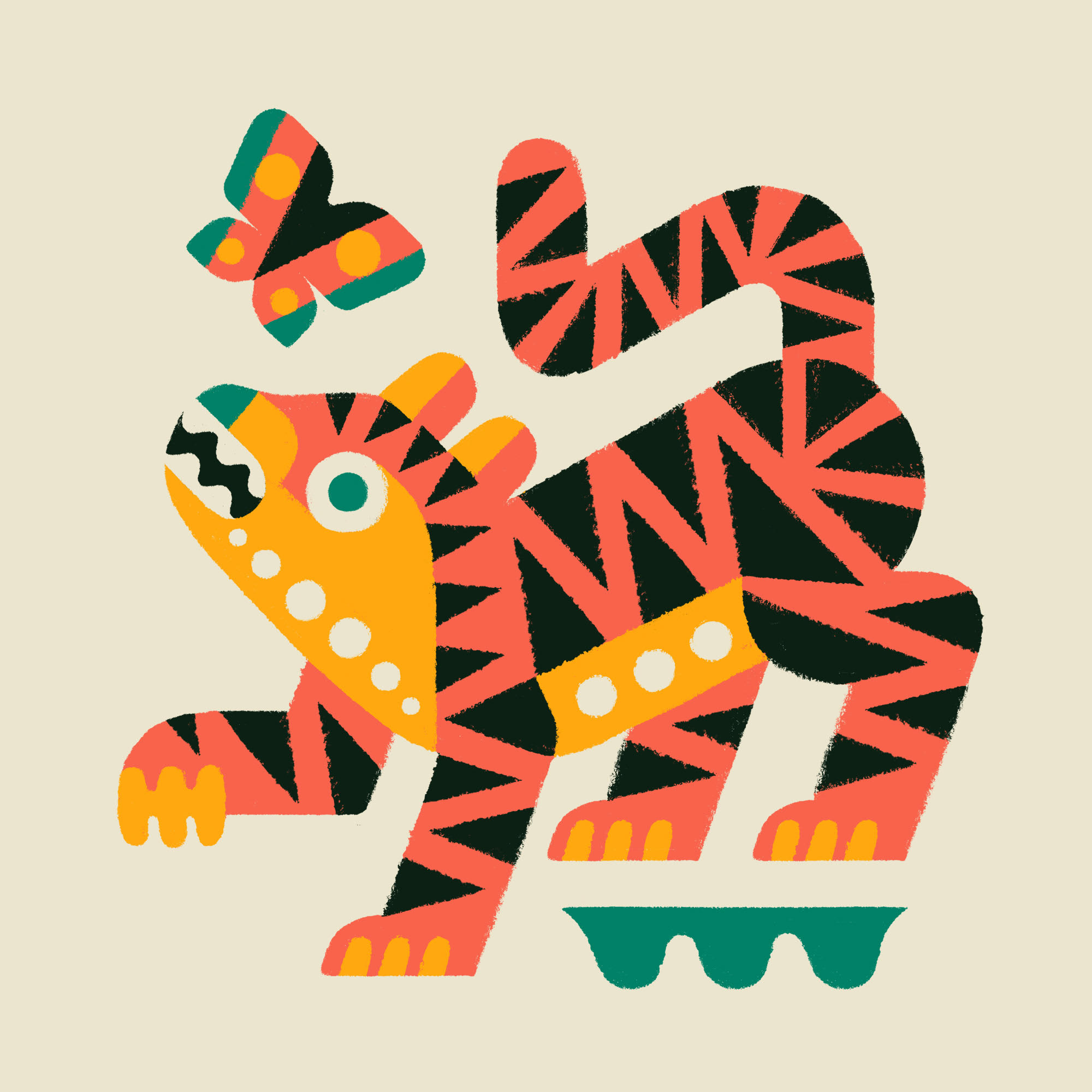 What three words come to mind when you think of your style? What kind of emotions do you try to awaken with your style?
My style changes pretty often because illustration demands an ability to draw in a million ways – but I would say my style is somewhat archaic, silhouetted and positive. I like to make work that feels like a simplistic, iconic shape that feels like its from another time, but also has optimism and vibrance. It’s my happy place, so I want you to feel happy and curious looking at it. Maybe there’s a larger story? Maybe there’s a symbolism? Maybe I just like drawing birds right now? That’s for you to decide.

You are also art director at Jolby & Friends. How the life is going there?
Life’s good! It’s a dream job to draw alongside people that you care a lot about. We are fortunate to have some pretty amazing clients, which makes the daily life that much cooler. Hard to complain about this crew, top shelf. Definitely credit Josh and Colby for helping me find my voice and draw it out of me with positivity and constant pushes… love those guys. 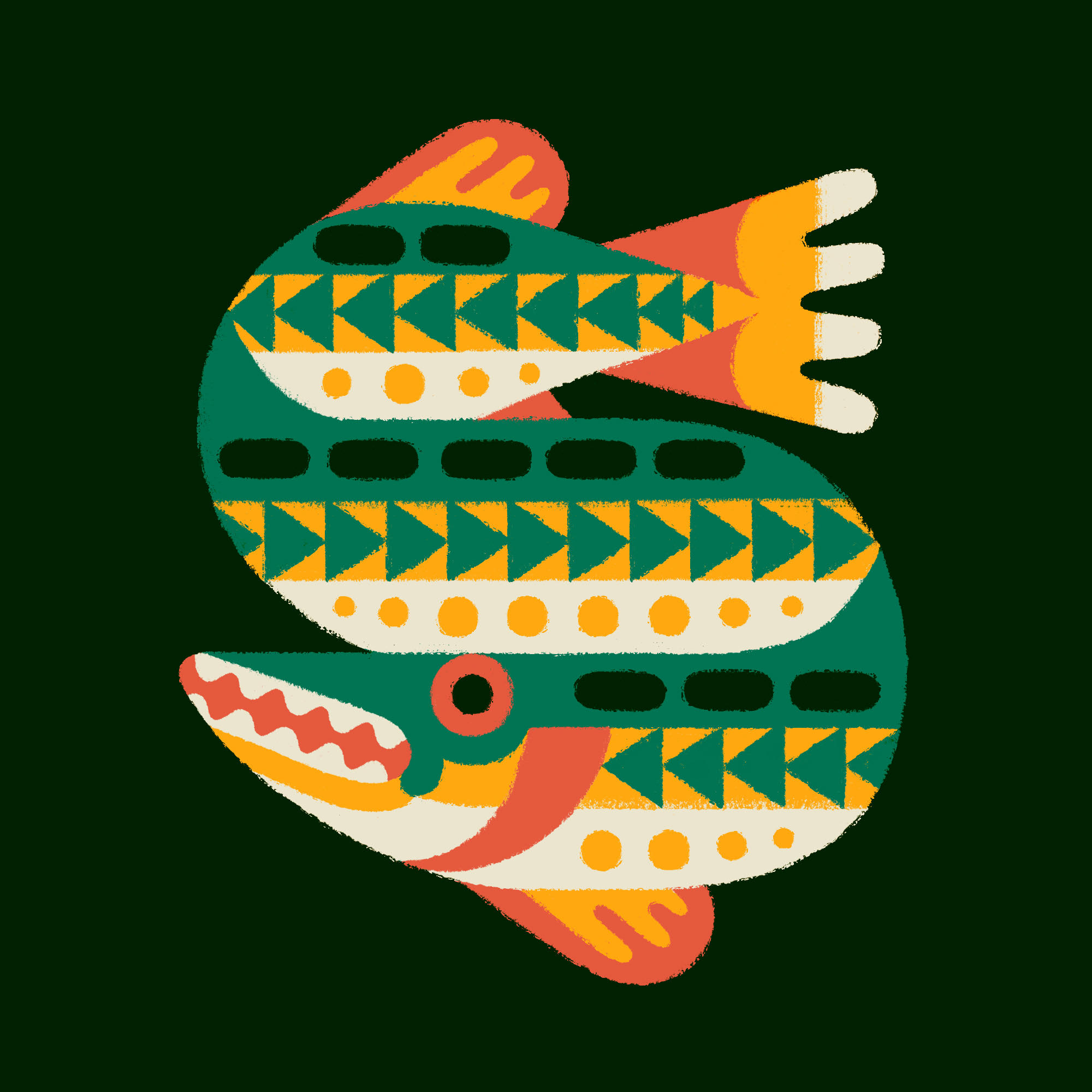 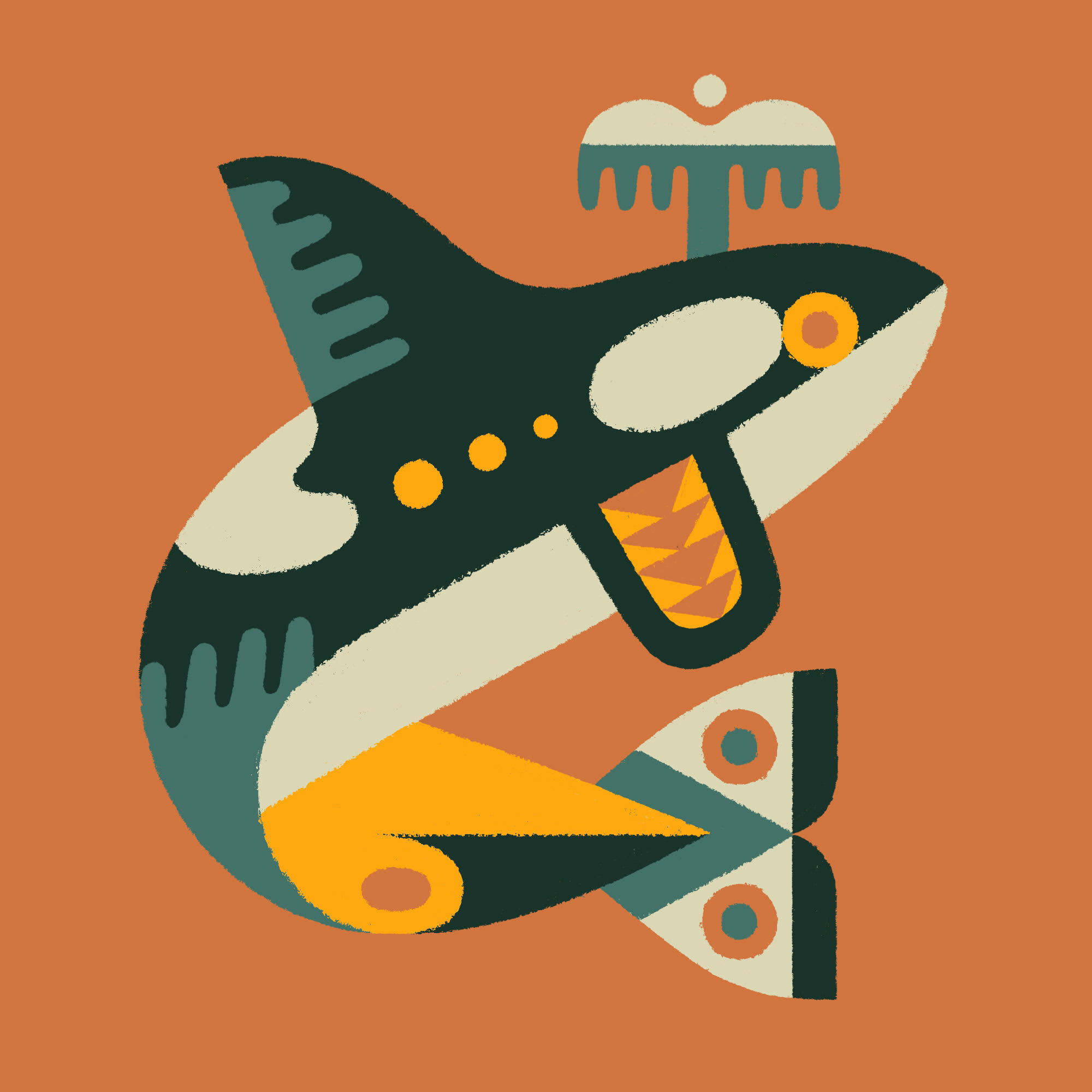 What do you love about hand lettering/typography?
Lettering is pretty wild because it carries so much weight and meaning. It not only says something, it FEELS something too. Lettering could say a phrase, but the way it’s drawn portrays a time period, a vibe, a state of thinking, a personality, and also lets you look into the person who drew or designed it. It’s wildly fascinating how much lettering can do just at a glance – it’s hard not to be completely obsessed with it. I especially have been drawn to type that is barely legible because it’s a discovery of what the phrase says, so it’s transcends spoken or written language. It becomes art at that point, which is super interesting.

What is your favorite word to hand-letter?
I like words with double O’s because there’s an opportunity to build something cool out of those combined vowels… really cool. Get it? 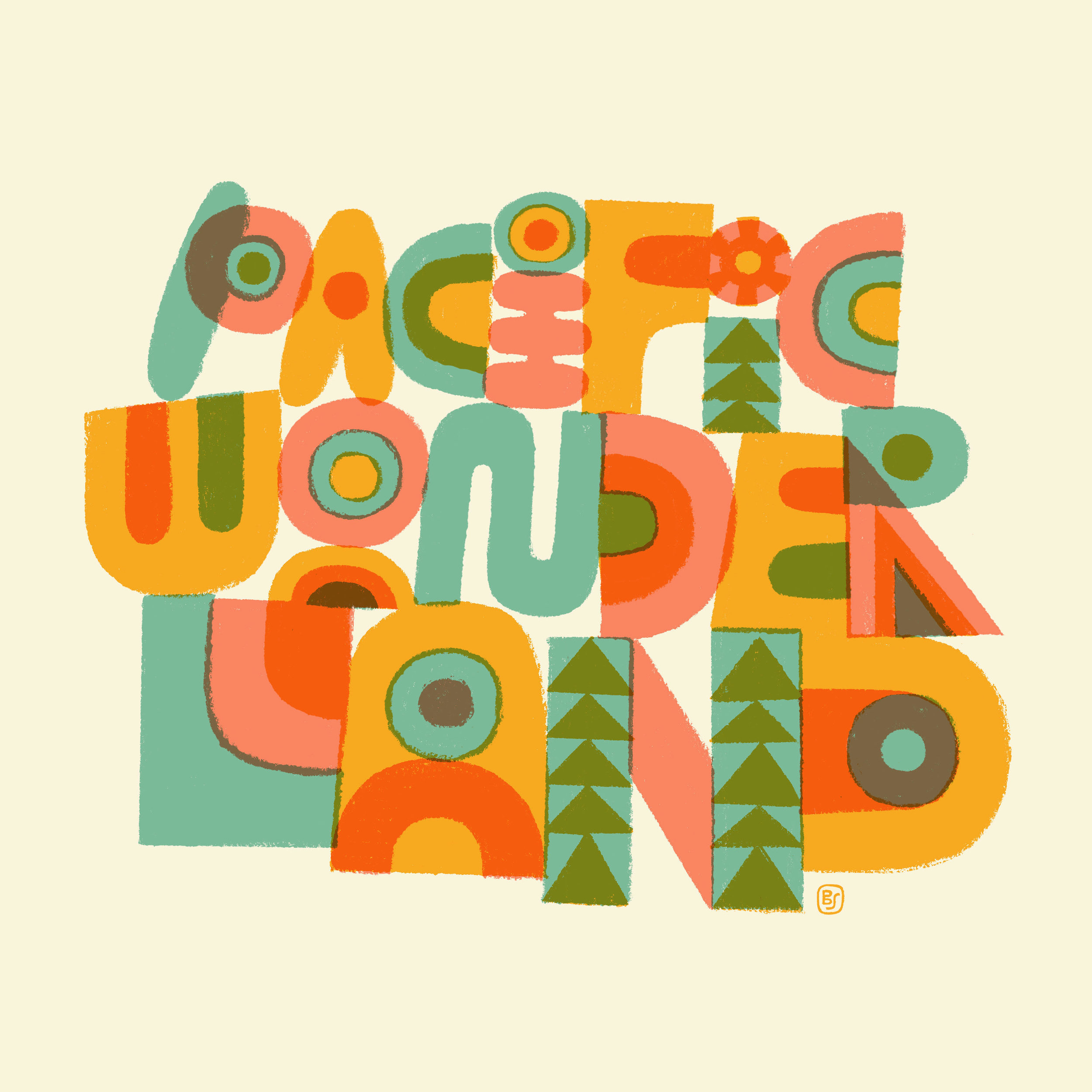 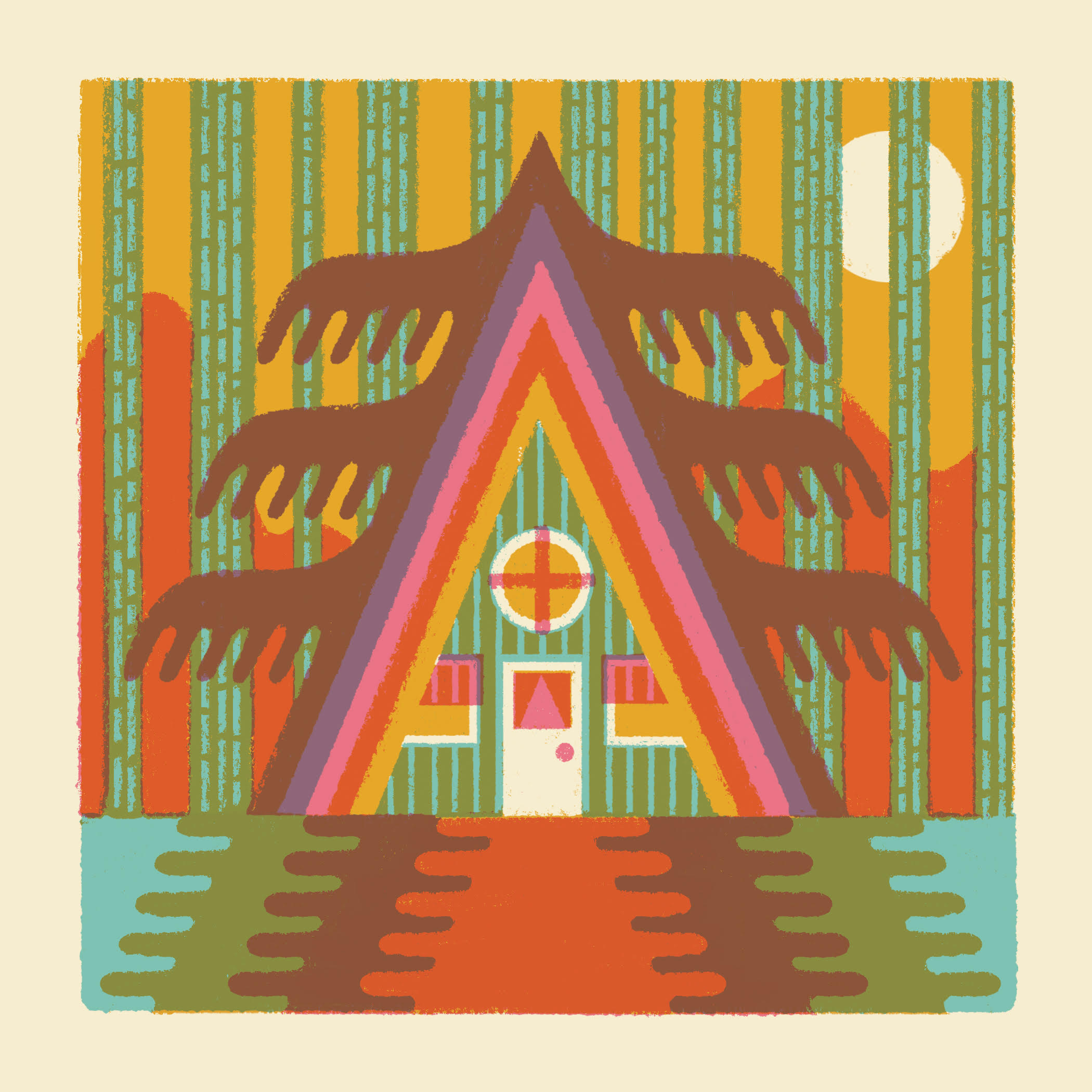 We’re happy to hear that you are working on 10×18 project. What is the most exciting part of being in the that project? How did you choose your favourite albums?
10×18 is super exciting and can lead you to doing really rad self-initiated work which usually leads to more work. The simple color system is really fun to build on and push the limits of the palette, which I’ve been doing this year by overlapping colors. Choosing albums can be a task in itself because I just love so many albums throughout the year, so this time, I picked based on what I’ve listened to the most, and what has struck me as truly interesting music that inspires me and my work. 2018 was a great year for music!

Can the creativity be learned later, or is it a feeling that is always within the human being?
Creativity can 100% be learned. Without a doubt, anyone can be creative, just like anyone can be open-minded. It just takes an assessment of how you think, and thinking through a different lens. My mom always says she’s not creative, but now she’s painting barn quilts all the time. Not in a million years did I think she would ever paint, but she does quite often which is super rad to see. I think being creative simply means finding less-thought-of solutions to a way of doing something which can be interpreted in a myriad of ways. 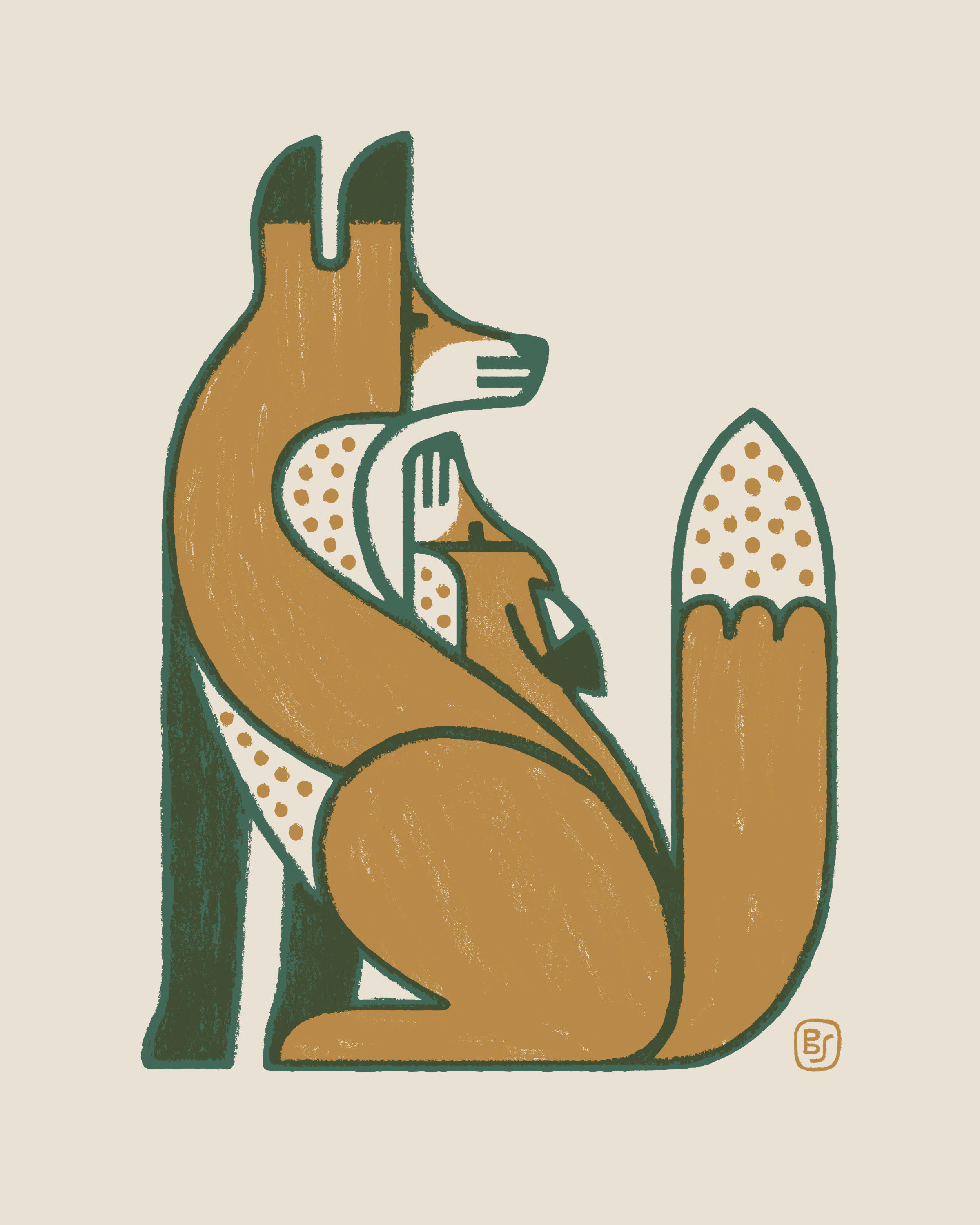 Who is your favourite illustrator/designer of all time and why?
There are so many. One that has struck me the most in recent years is Kenojuak Ashevak. She has such a whimsical and incredibly beautiful way of drawing figures of her culture and of nature. If you’re not aware of her work, she is regarded as one of the most prolific Inuit artists of all time. Incredibly beautiful work, and a massive catalog of surreal birds, bears, people, etc. Her abstractions of common creatures just blows my mind. I love so many other designers too, but my favorite would have to start with Herb Lubalin and Charlie Harper. Massive influences on my approach to type and brevity of shape in my illustration. Absolute powerhouses! 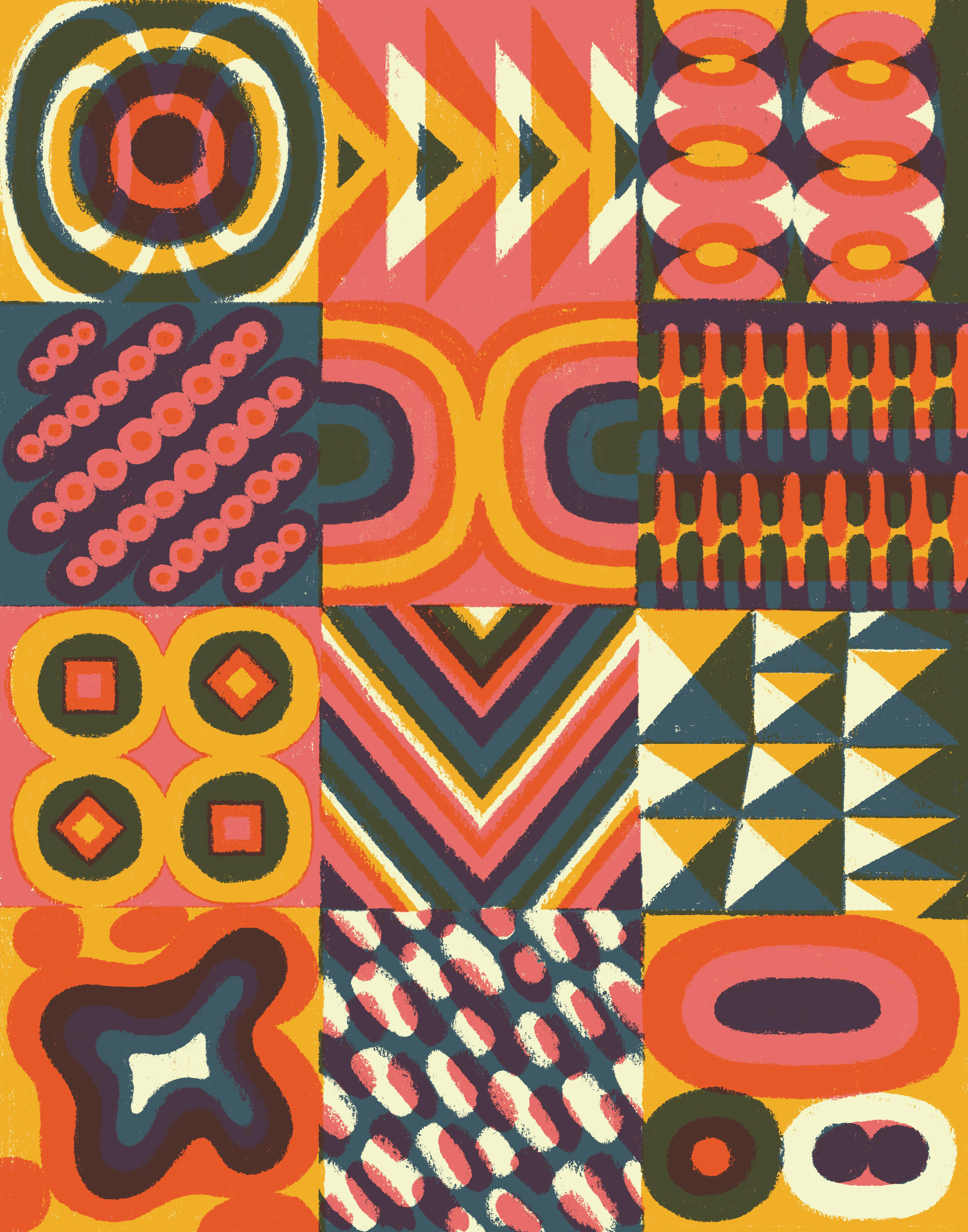 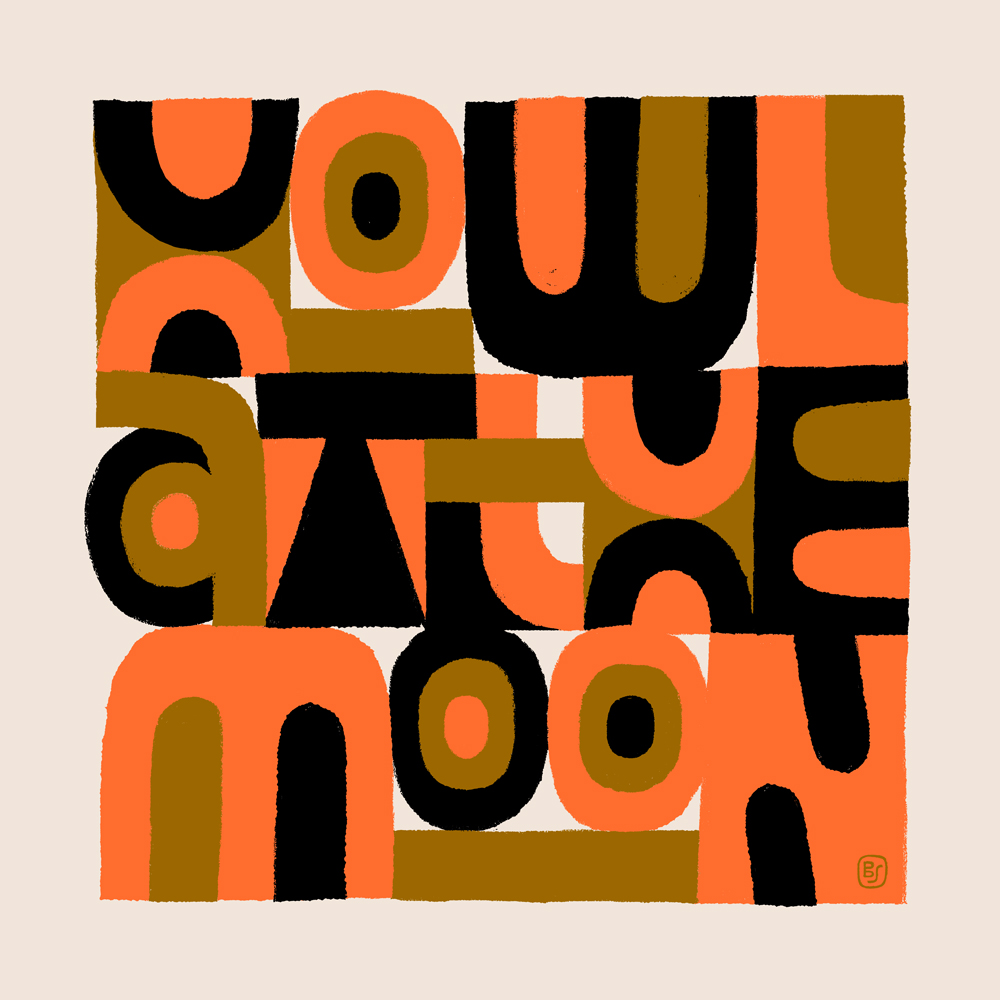 What is your biggest source of inspiration?
Music. I listen to music nonstop, and they way music makes me feel basically just refills my brain tank every day all day long. I make music too so that helps me think differently about sound and surprisingly tingles my visual brain. Travel is another big pool of inspiration for me, whether it’s going to Iceland for a week, or to the forest right outside Portland. Movement beyond sitting at my desk just recharges my batteries and gives me time to think beyond just stuff on the internet. You don’t find your own voice admiring other people’s experiences.

Where are your favorite spots in Portland? Food, coffee, shops, etc.
I love coffee, so Upperleft / Coava / Heart are my jams for a good cappuccino. The food/drink scene here is insane – Kachka, Ava Gene’s, Rum Club, Bar Norman, Ox, Pok Pok, Duck House… so many to choose from. My go-to almost weekly for a beer is Baerlic, which is right down the street from our studio. Love all the bartenders and the people running that place are amazing. Best dive spots: The Slammer, Lutz, My Father’s Place, and Lay Low. 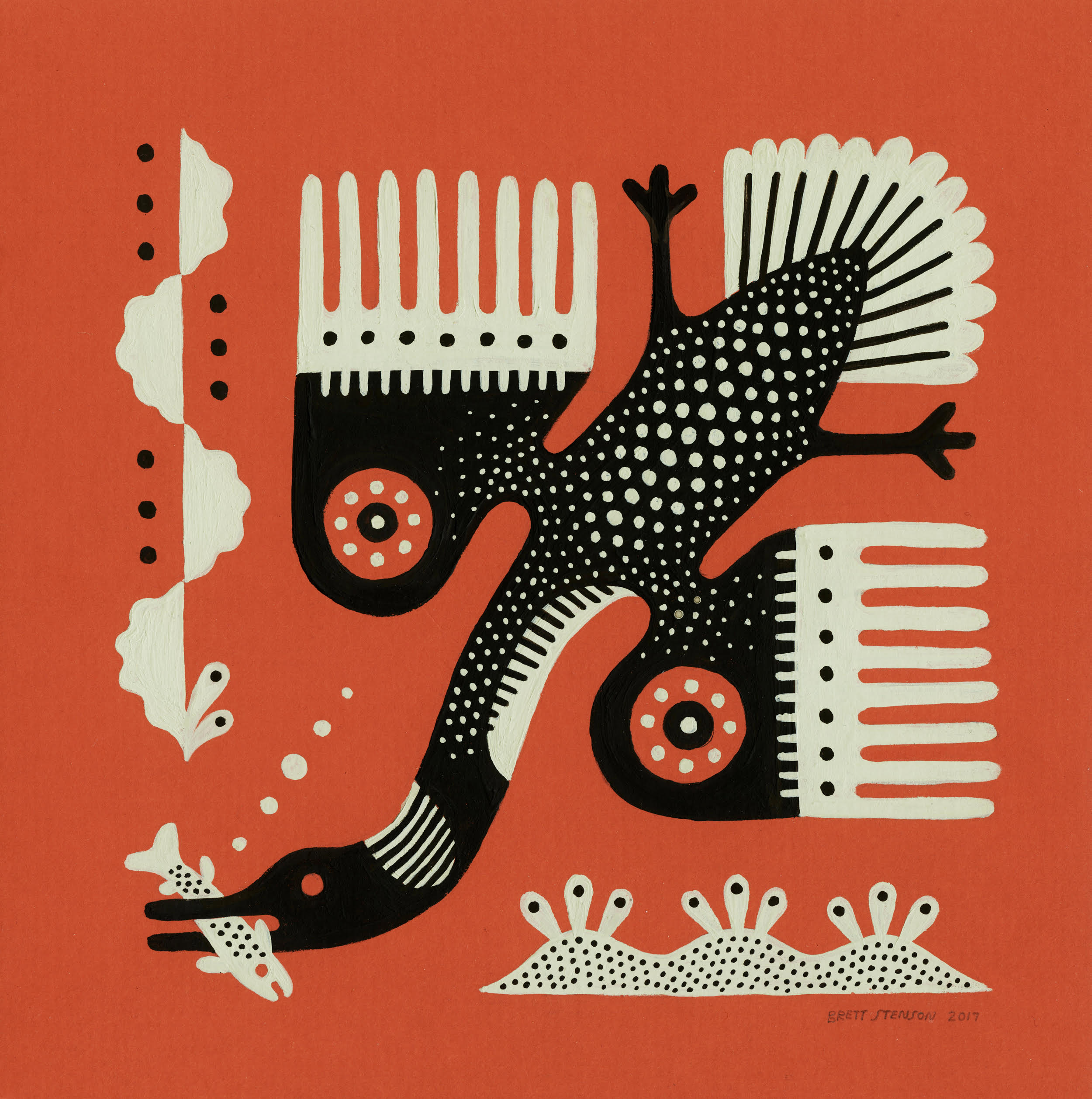 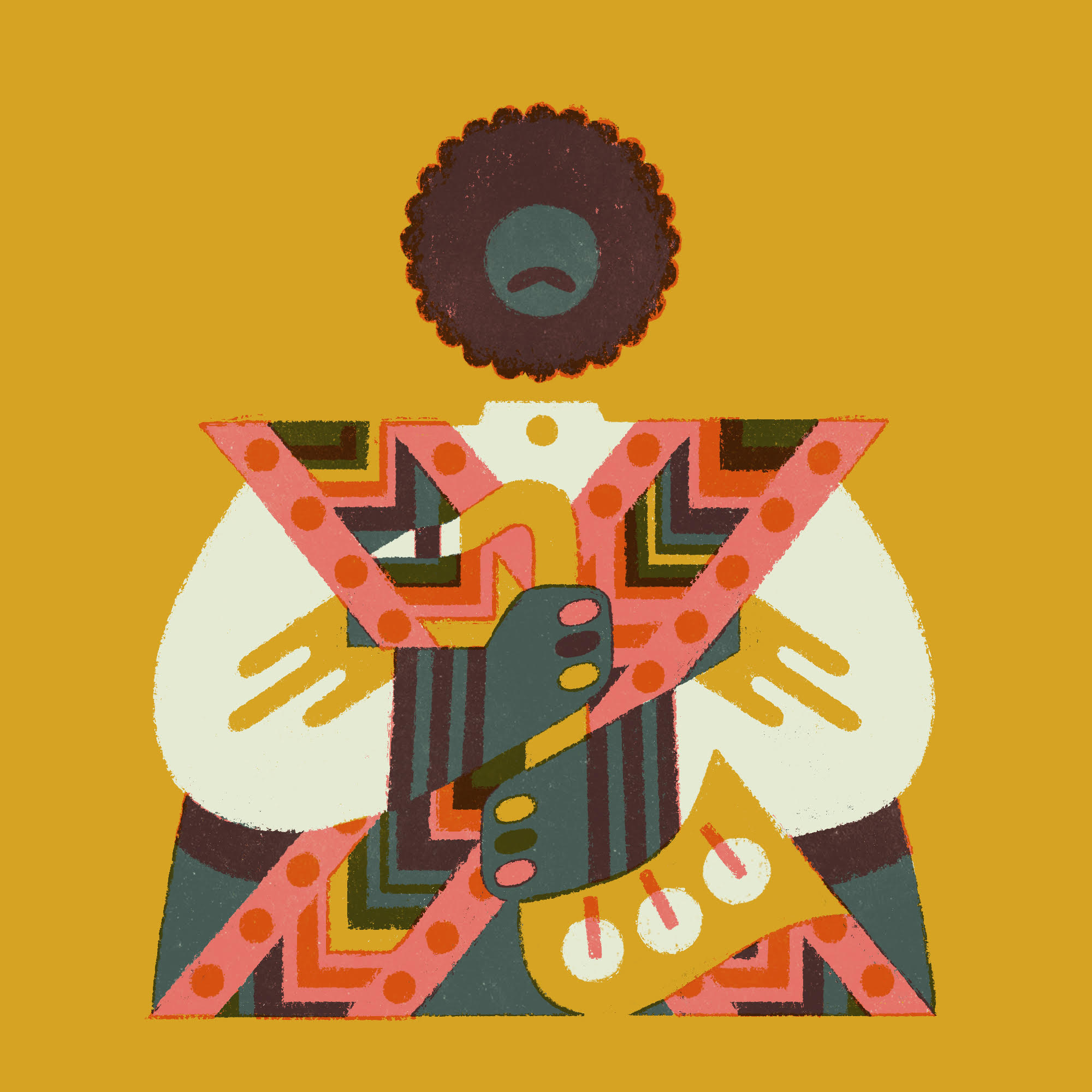 What are your top five songs on your playlist?
For 2018:
1. My Friend the Forest – Nils Frahm
2. Back to Nature – Nightmares on Wax
3. Street Fighter Mas – Kamasi Washington
4. Savage Trash – Bus Gas
5. Nothing Stirs – The Body

What are the five books that every designer should read?
I’m probably the worst to ask, I barely ever read, unfortunately.

Finally, is there something you wish interviewers would ask you — but never do?
I think all of these questions are great. I think most interviews about design warrant somewhat similar results because we all do a similar job of expressing things visually either for ourselves or for other people. Diving deeper into personal stuff is always fun because people only know you for your output and not for who you really are. I love so many illustrators and designers for their work, but have NO idea who they really are. I think my goal for the next year or so is to get to know more designers on a personal level and meet people. Also, don’t be scared to meet “famous” designers, they’re dorks too. We’re all dorks. Be dorks together.