“I’m always looking for materials that would somehow interact with the light in a very special way: silk, velvet, glitter paper…” 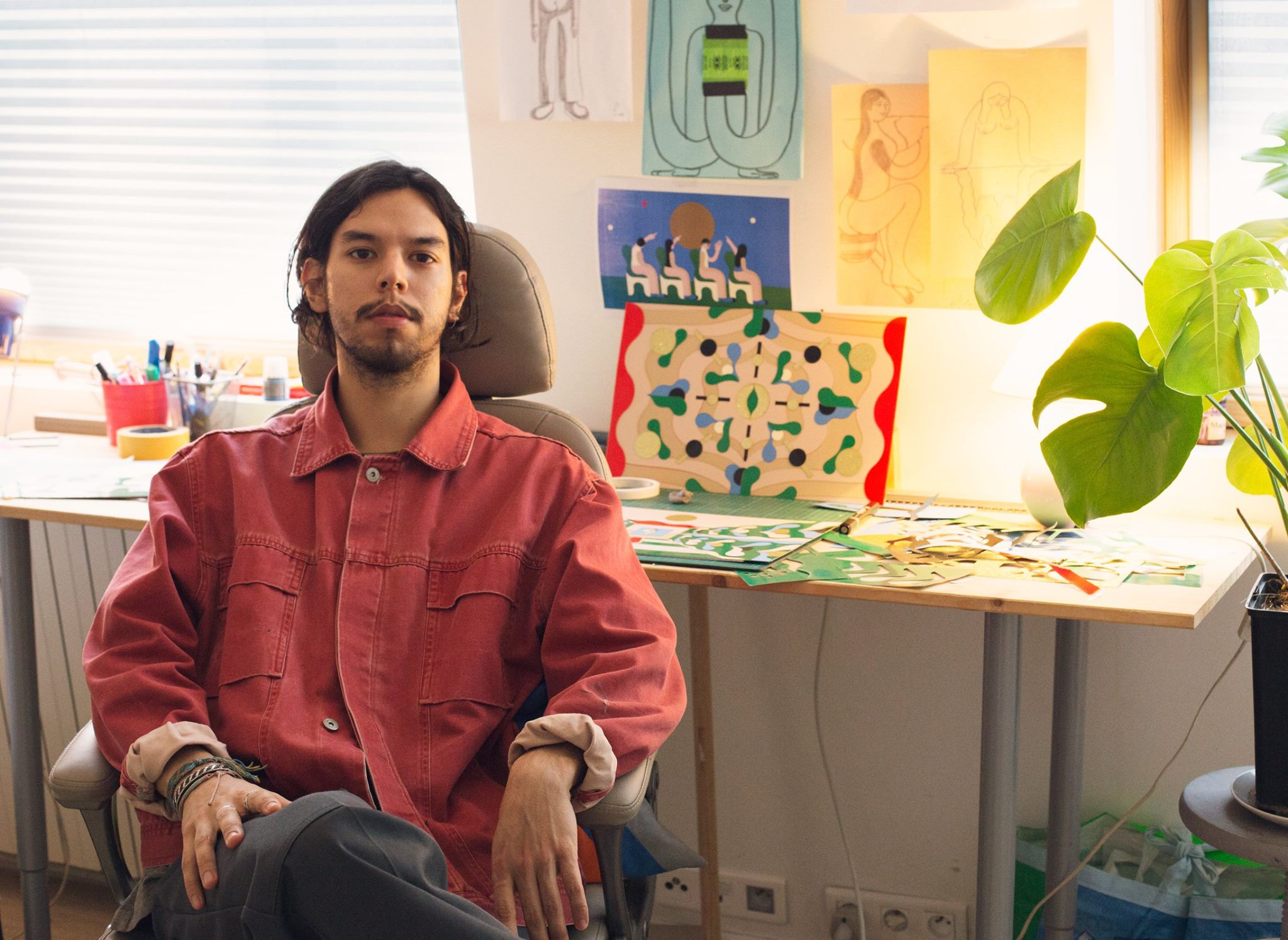 Hello, Carlín!
How would you describe yourself – who is Carlín Díaz?
Carlín Díaz is a kind guy, almost all the time focused on little details, with the head far away from the present but he’s there when he has to. Above all Carlín is passionate about the visual arts.

How and when did you discover you wanted to be a graphic artist & illustrator?
I’ve been discovering that little by little. At first I wanted to be a graphic designer but as I was studying on that I realized that it’s hard to have a creative freedom with it and the fact that I had to spend hours in front of the computer limiting myself to make things as « clean as possible » So I went into the illustration where I feel comfortable with, it’s a good balance between personal and commercial work.

I see being an illustrator as a step, I do love making animations, painting and collages. 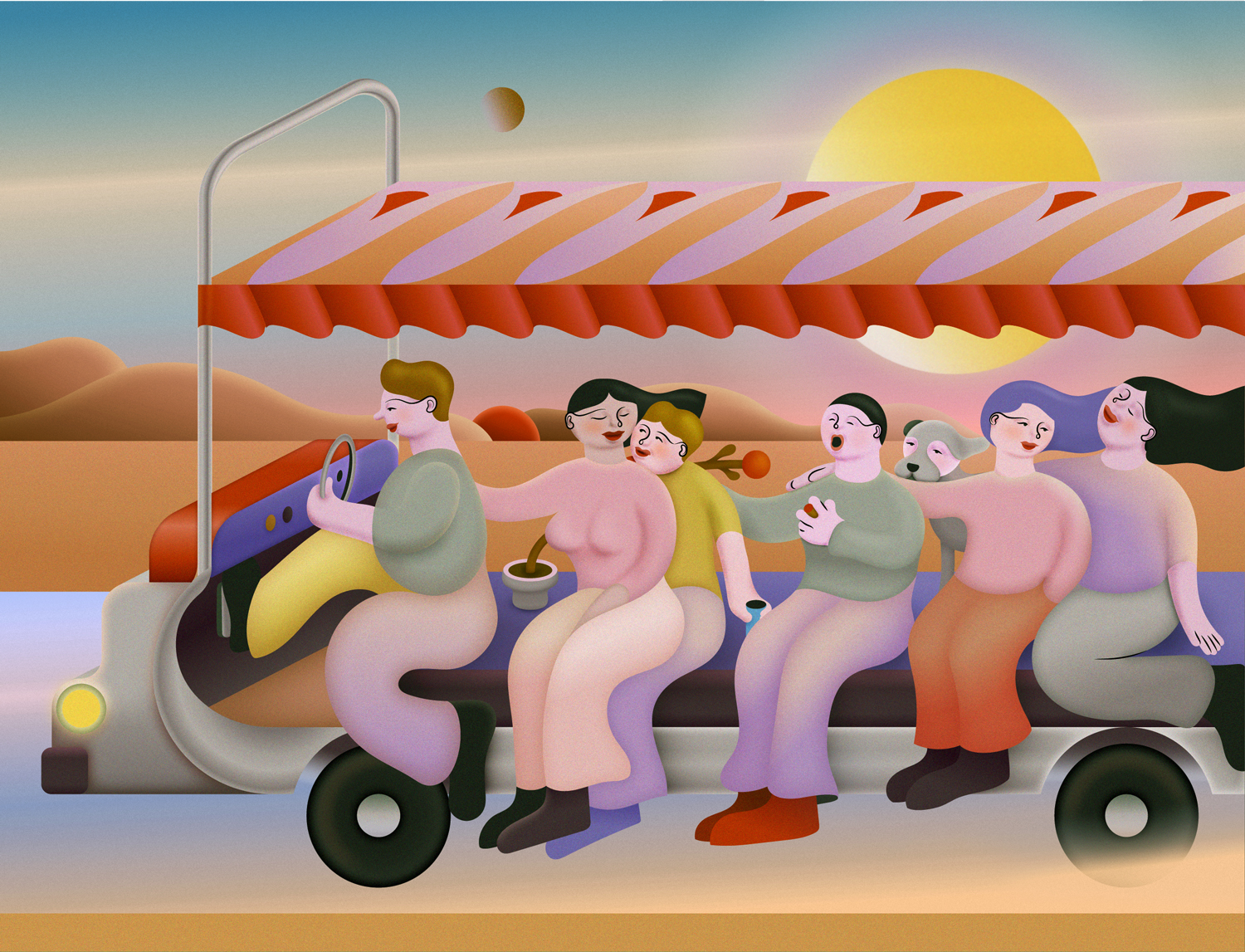 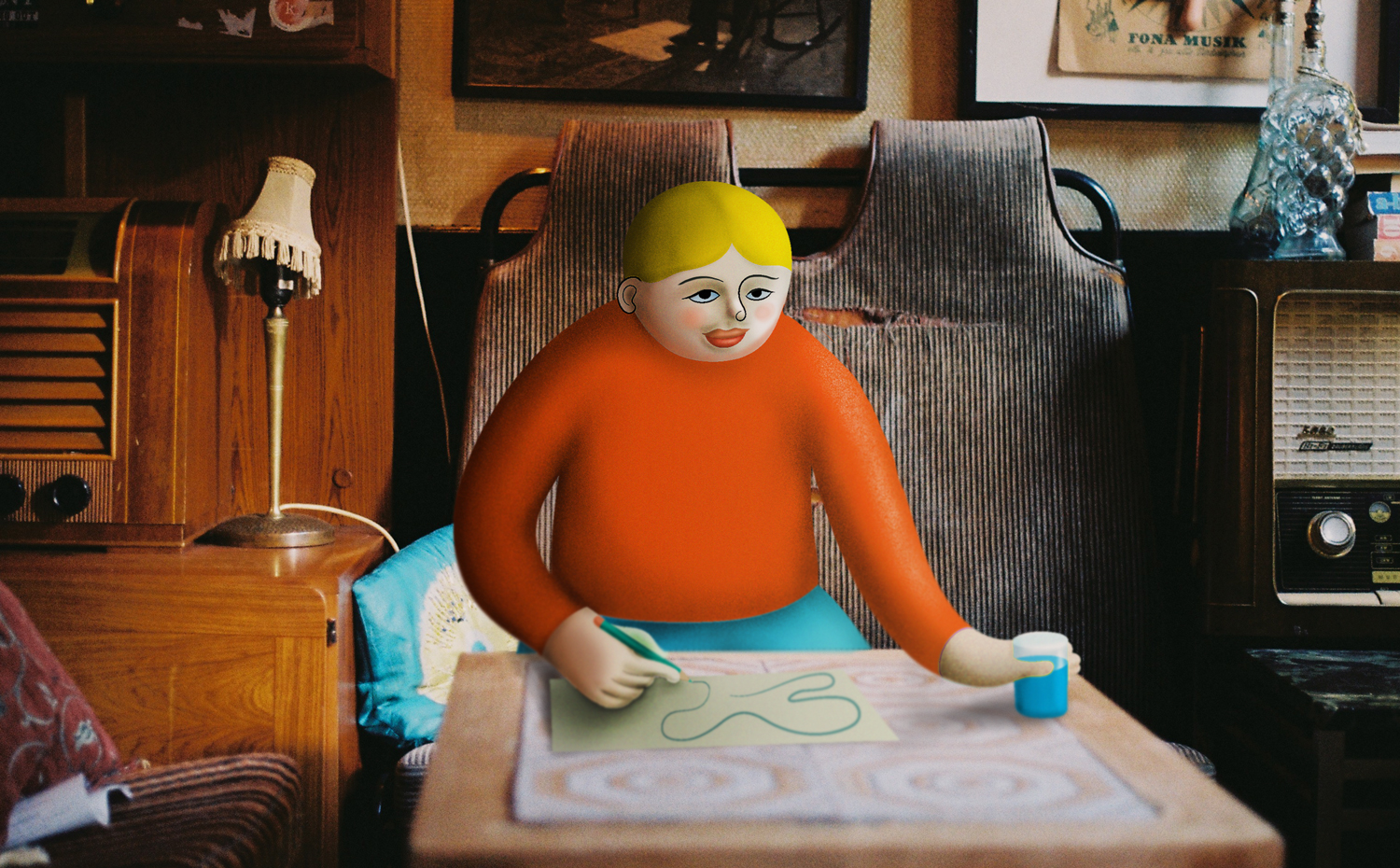 One of your newest series that catches our attention is Sun, Sol, Soleil. Could you please tell us more about it? What is the story behind it?
Since 2015 I tried to produce at least a series of collage each year, the first one was « A week of someone else » Then, « Brown is a beautiful color » from 2016-2017 and « Sun, Sol, Soleil » from this year.
The main idea for this series was to feature the relation or connection the human being has with the light, in all senses as it’s been a while that I wanted to experiment with different materials so that was a good opportunity to use the ones that reflect the light such as Chromolux and glitter paper. 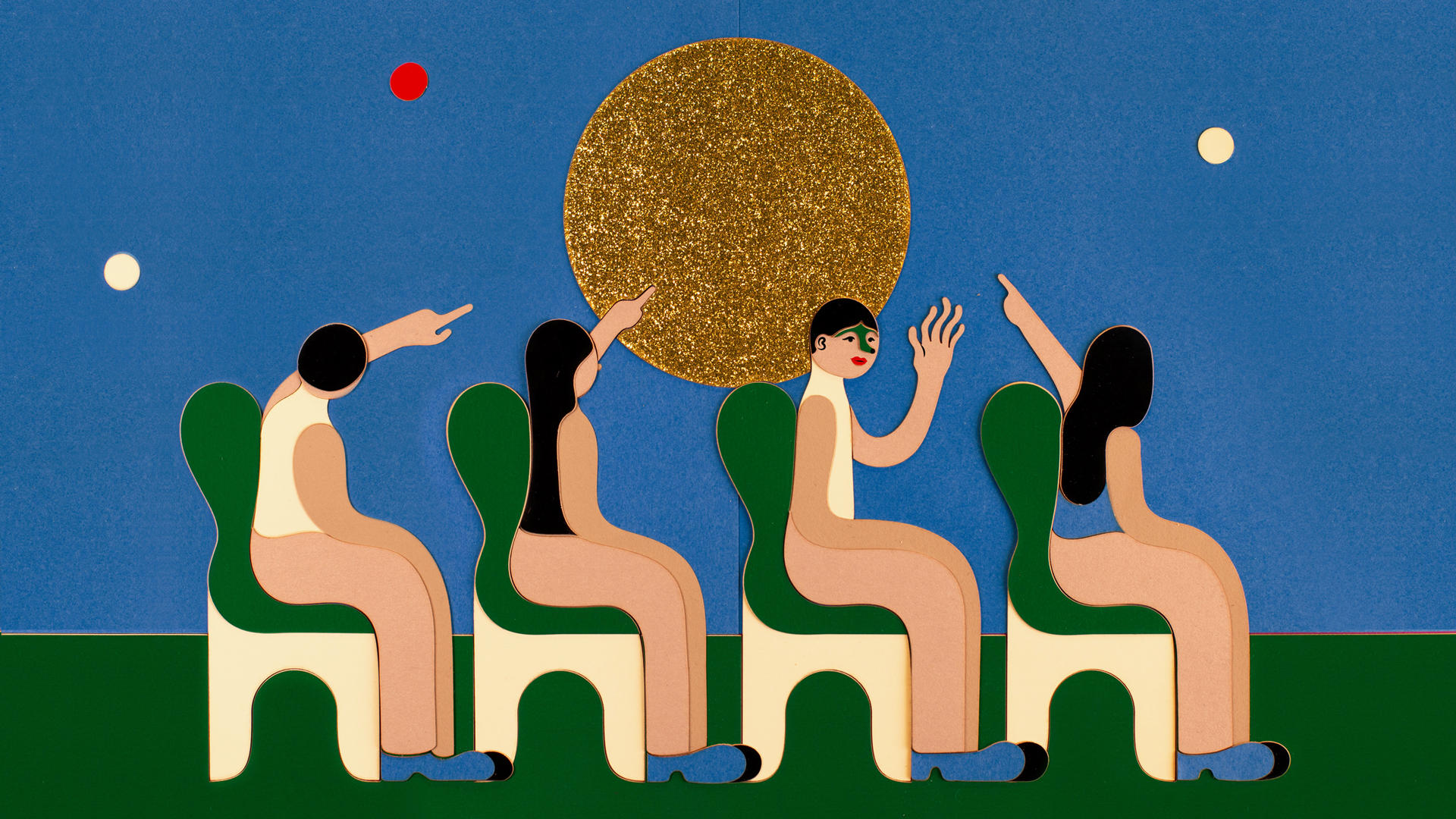 As you mentioned another series of yours is Brown Is A Beautiful Colour. How did you develop the idea of the story?
As a nature lover and for all that’s happening to it I felt super inspired and decided to make a series featuring the connection between human being and nature personificating it, showing in some cases how it suffer or how gentle her is. 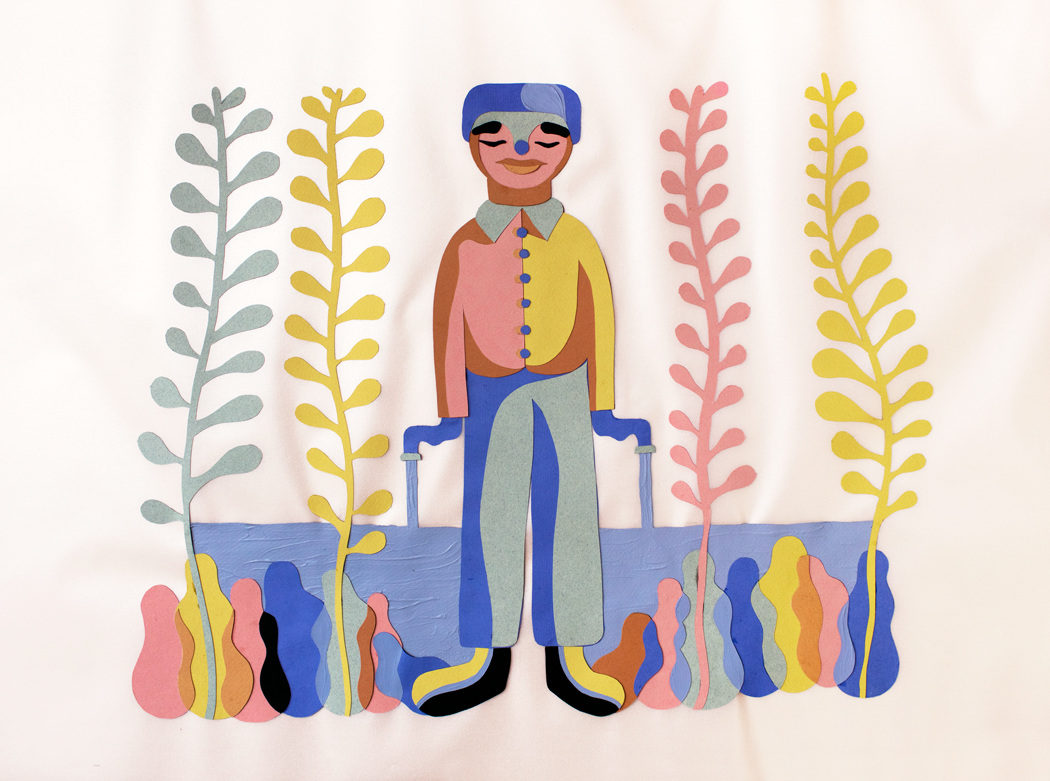 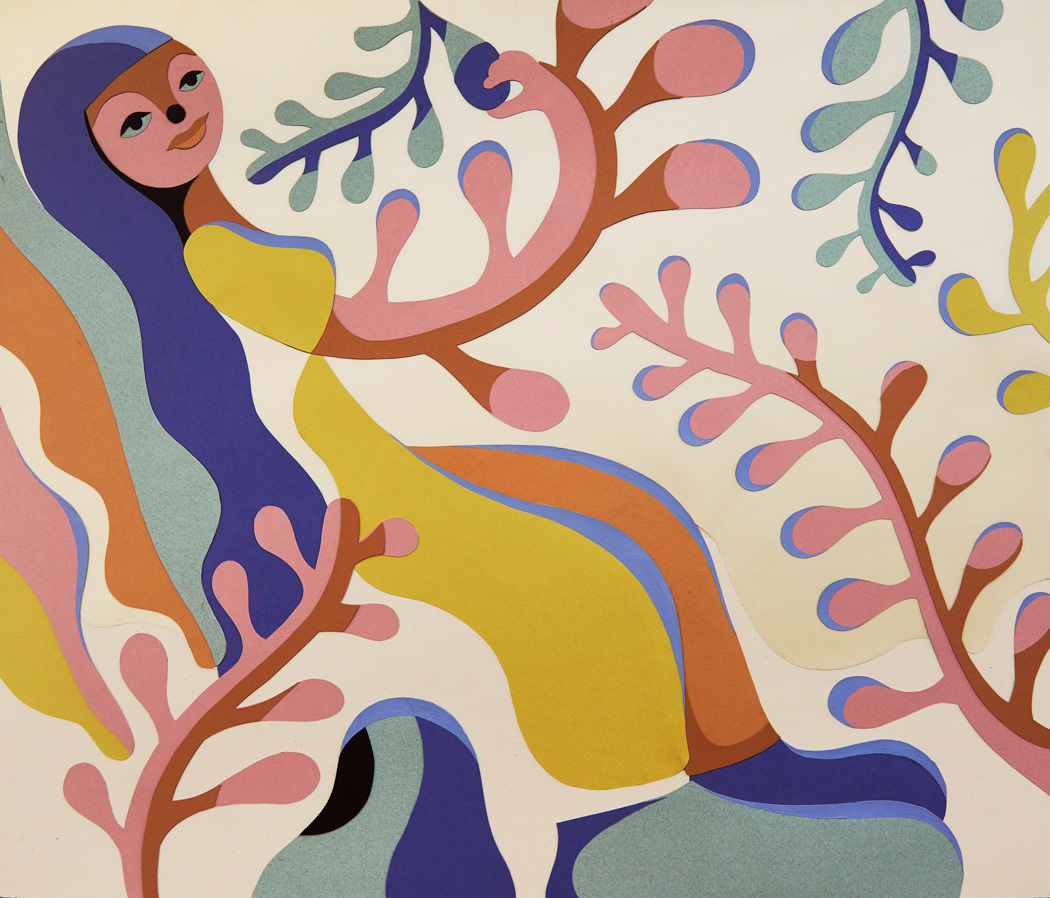 You have also worked with Kakkmaddafakka, what was that experience like?
It was awesome! Actually, it started from a conversation with Axel at one of their gigs, here in Paris. After their concert we found each other talking about anything in particular until one moment he asked me what I’m doing for the living. He really liked my work and he gave me carte blanche with any song I would like to select of, at that moment the unrealized Album « KMF ». The only condition was that the history has to happen in Bergen.

Do you have a favorite project or piece of your own work?
‘Man trying to put out a fire’ from Brown is a Beautiful Color, 2017, is one of the ones. 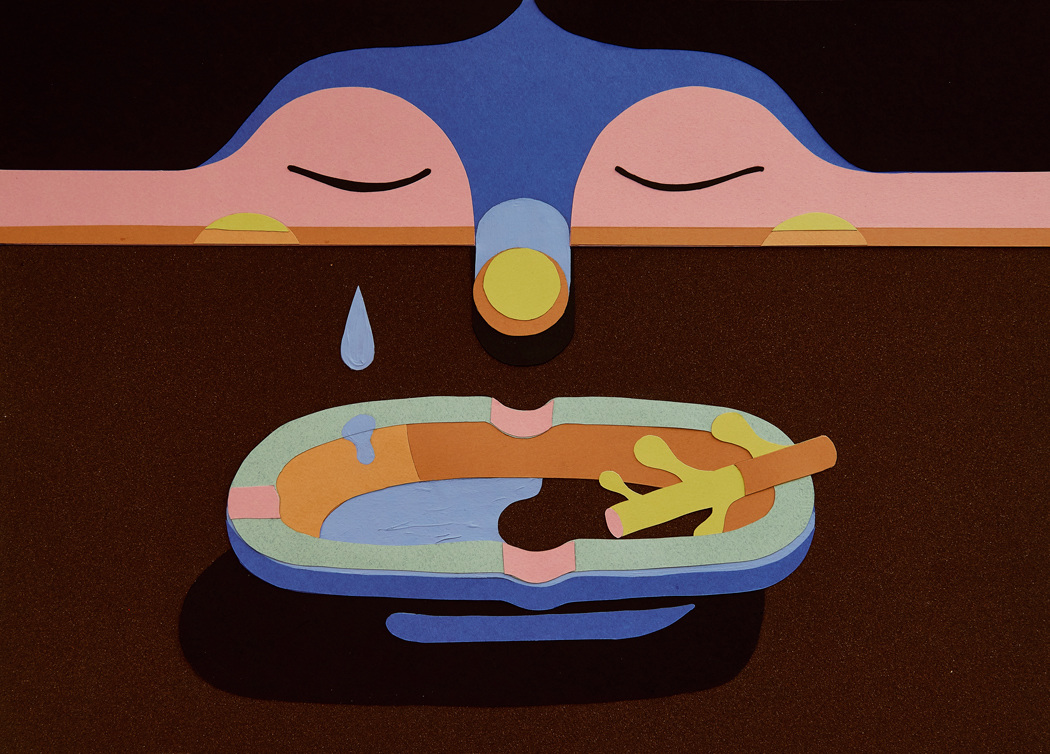 In all your work, we see circles and geometric figures, yet how would you define your style?
I really like the geometric side in artworks, it kind of gives a playful vibe. I started to use them a lot back at my graphic design époque and with the time I wanted to personalize the geometric forms, giving them an organic side. So I could define it as an organic geometry, Yorokobu called it back on 2014 « sensual geometry » which I found it very sexy hehe.

Which materials do you use in your work?
At the moment I’m thinking and experimenting with fabrics. I’m sensitive to the warm vibe or depth they can apport to the artwork. However, I’m always looking for materials that would somehow interact with the light in a very special way: silk, velvet, glitter paper… 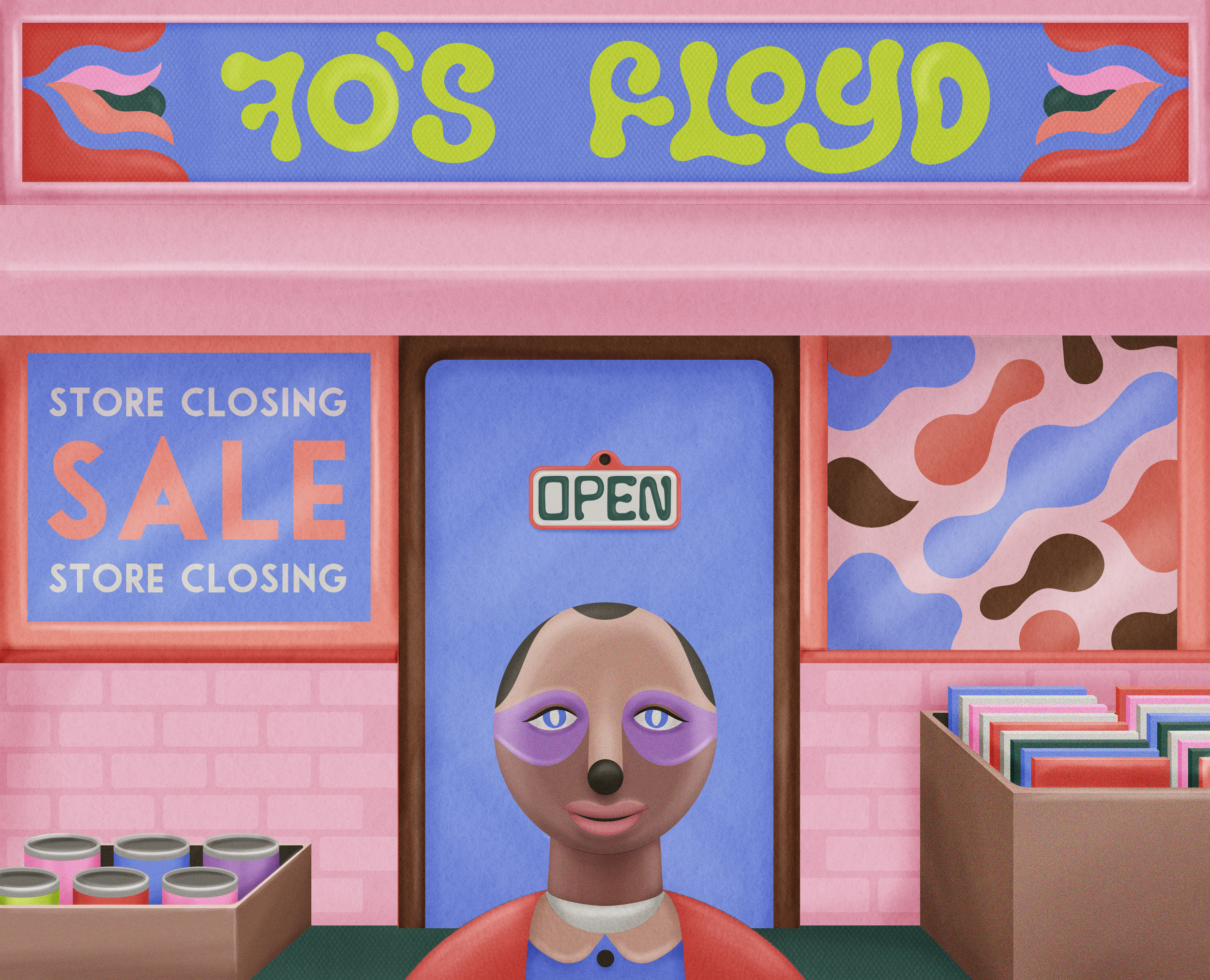 Can the creativity be learned later, or is it a feeling that is always within the human being?
Yes, you can always improve your creativity, scientifically proved!
When I was around 15 I thought that if you use it too much, I’ll spend it, without a recharge. But actually is the opposite.

Where do you get inspiration from?
I couldn’t tell you specifically from where exactly. I found my inspiration from every special moment, a funny one that had happened to me or that I just simply make it up in my mind, from music, especially solo guitars help me a lot to search deep in my brain, from beautiful natural landscapes. Generally when I’m relaxed. 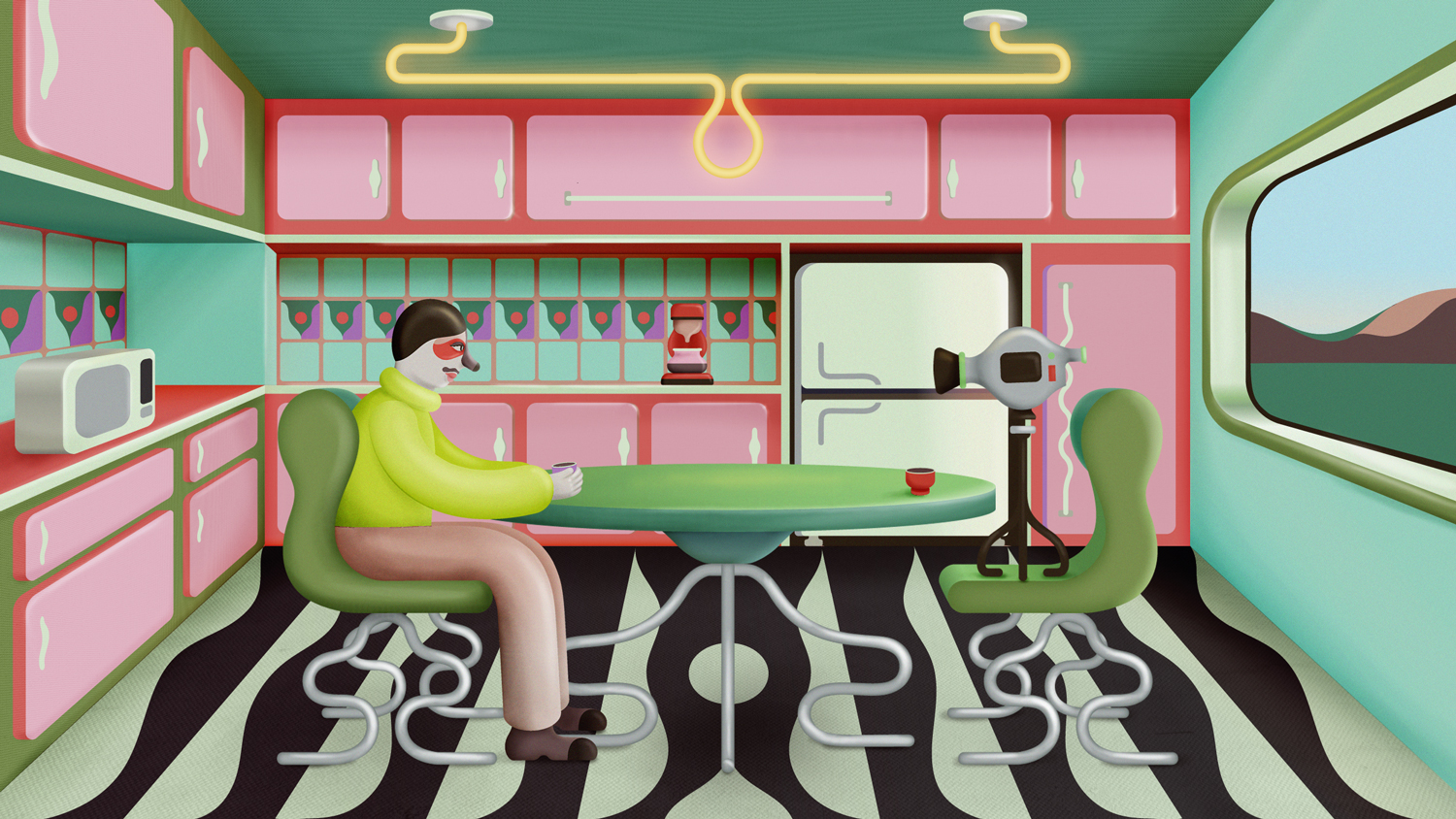 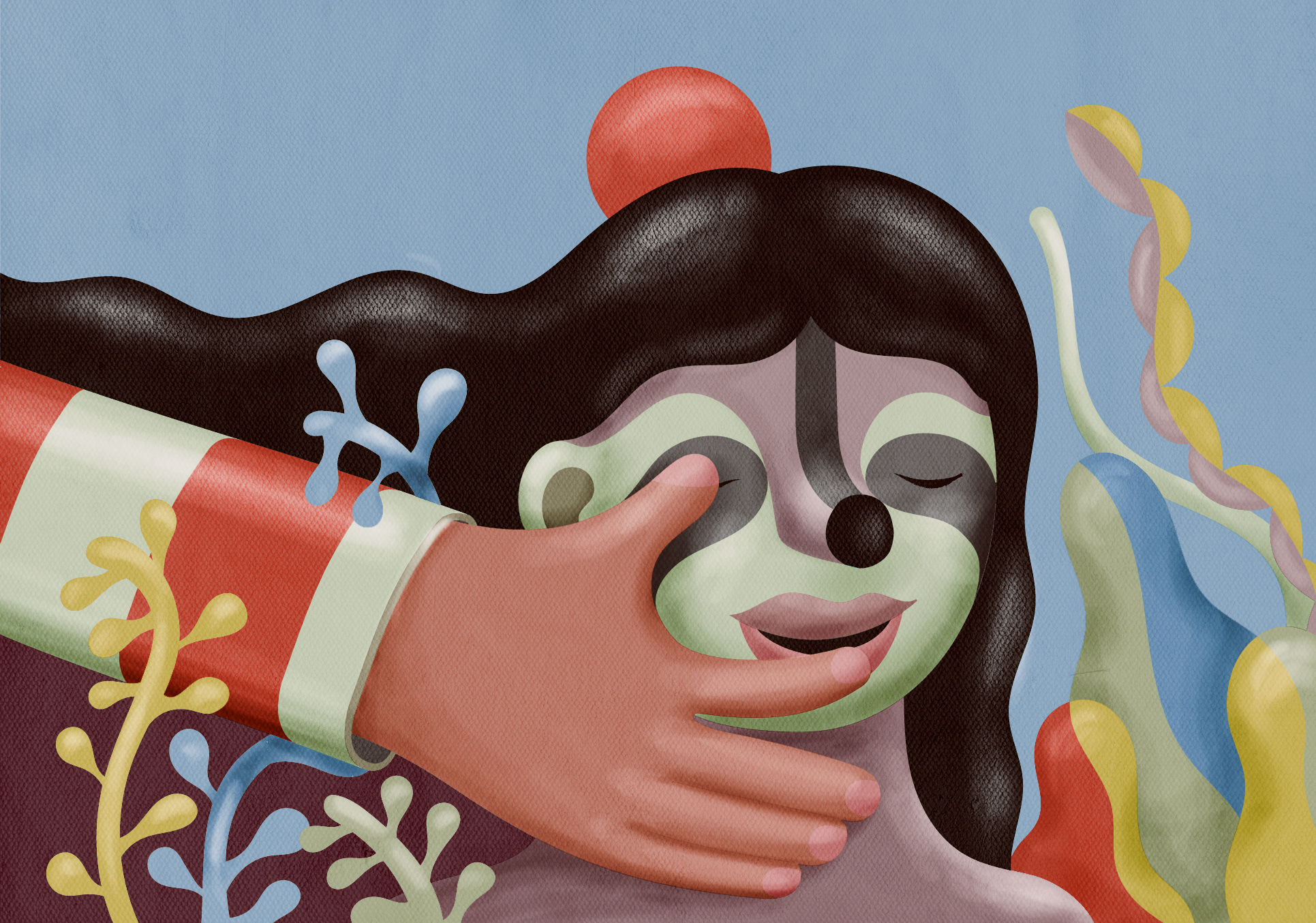 What other illustrators/animators are you digging these days?
Nicolas Menard has a genius simplicity that I really love. I always look back at Sean Pecknolds’ The Shrine / An Argument, I find it super deep and sentimental. Nadia Hernandez, from Venezuela as well has the power to bring up the traditional visuals from my country in a super contemporary and unique style. Geoff Mcfetridge is a genius as well, and the list goes on…

You’re born in Caracas, Venezuela. Now you landed in Paris. What draw you to Paris, and what artistic inspirations have Paris given you that Caracas wasn’t able to?
Since late 2000’s we have been suffering a critical economic and sociopolitical situation in Venezuela, after finishing my studies as a graphic designer I moved to Paris to live with my girlfriend. So I got love and a lot of inspiration! completely different than the one I received in Venezuela which was more produced by natural landscapes and colorful cities. Here is like a big speaker, where all the big shows and retrospectives are and that such an inspiring full source. 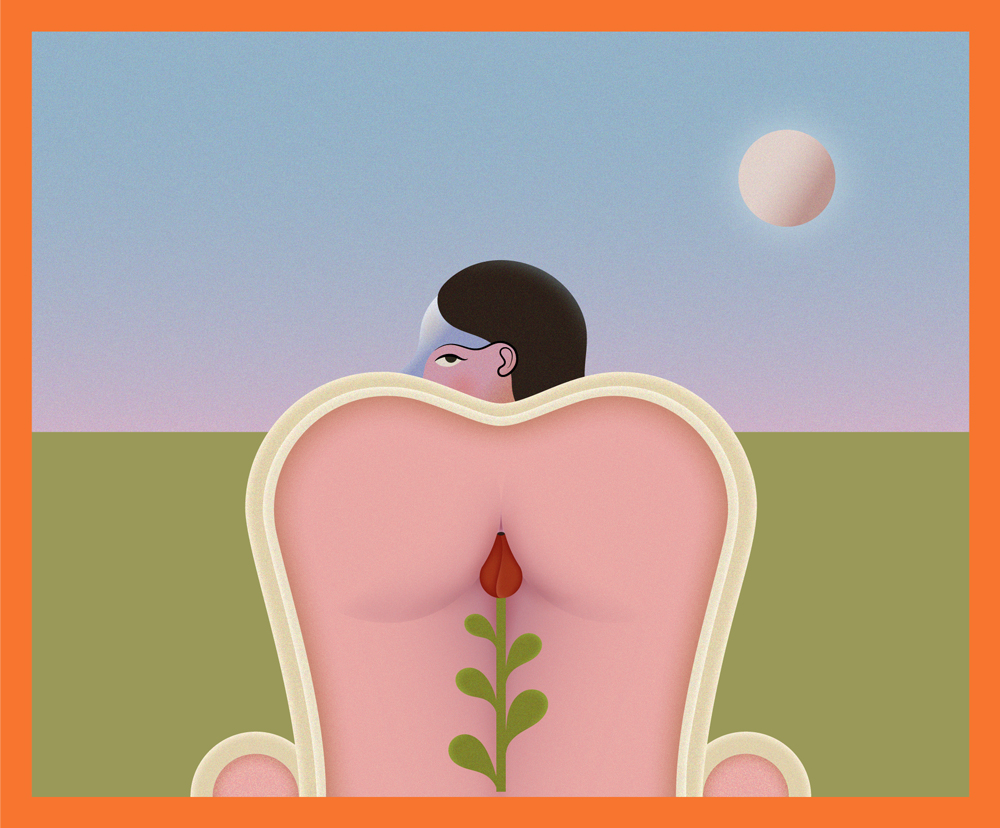 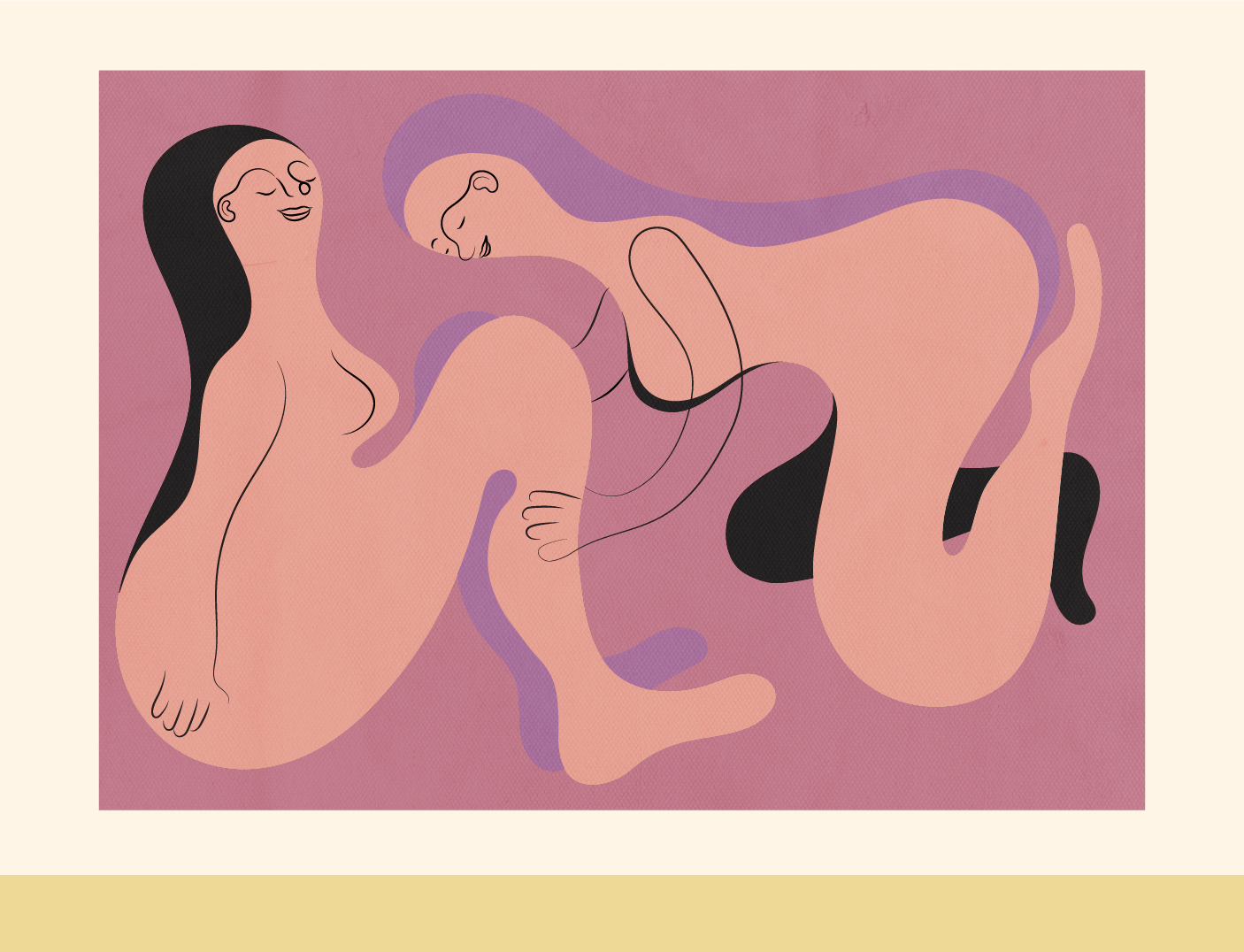 Could you give us three fun facts about yourself?
-I almost studied economy
-I tried to be vegetarian
-I don’t like boiled eggs

Finally, is there something you wish interviewers would ask you — but never do?
« Why you don’t like boiled eggs? »