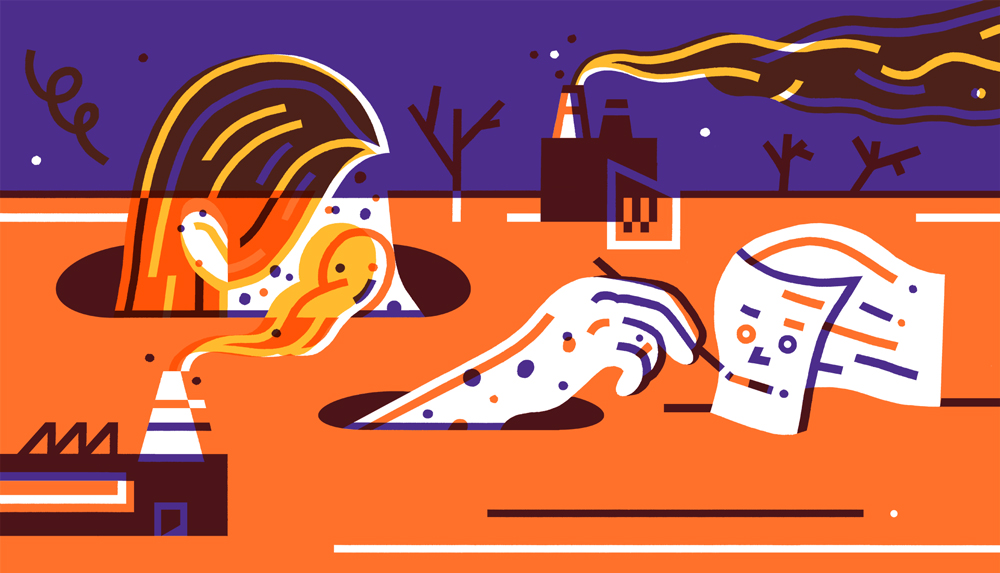 Hello, Nik!
When did you realize that you wanted to pursue illustration as a career?
I’ve spent a big part of my (early) life not knowing what to do, so before I went to pursue anything illustration related I dropped out of school and worked full time in a chicken factory. At that time I was also hanging out a lot on an internet forum where users would have like a small graphic/image as their signature, most of the time it was just a photo with a 3D effect and a username. I thought they looked cool and started messing around with Photoshop myself, which eventually led to me studying Graphic Design. Besides buying design related books, we were also instructed to buy and keep up a sketchbook, which I filled with inspiring pictures, collages, and little drawings. I sort of discovered illustration like that, and for the first time in my life, I liked something so much that I decided to stick with it, and I haven’t looked back ever since.

How would you describe your artistic style?
My artistic style can be best described as a world made of bright, overlapped colors. My style is rather imaginative and not very realistic and takes place in a world of its own, which basically gives me the freedom to do whatever I want and draw however I imagine things to be.
As far as technique I like to work with a limited color palette and make (smart) use of overlapped colors. It’s really challenging to make it sometimes work, almost like solving a puzzle, which is something that I really like. I’m inspired by traditional printing techniques like risoprinting and screenprinting and specifically the part where different color layers aren’t registered properly. I make use of this aesthetic in my illustrations, and I like to think that it gives my work some motion and movement. As of late, my work has been getting a little bit more clean, mostly focusing on linework and solid shapes.

I like the way you use the colours. What does the use of color mean to you?
Color is expression! My illustrations aren’t meant to be a 1:1 translation or the copy of a text or thought. Instead, I rather create and contribute the world that exists because of that text/thought. It’s kind of strange to put it in words, but I guess I’m creating an atmosphere or feeling to tap into. I want the viewer to be able to feel a certain way, and I think color plays a big role in experiencing this. 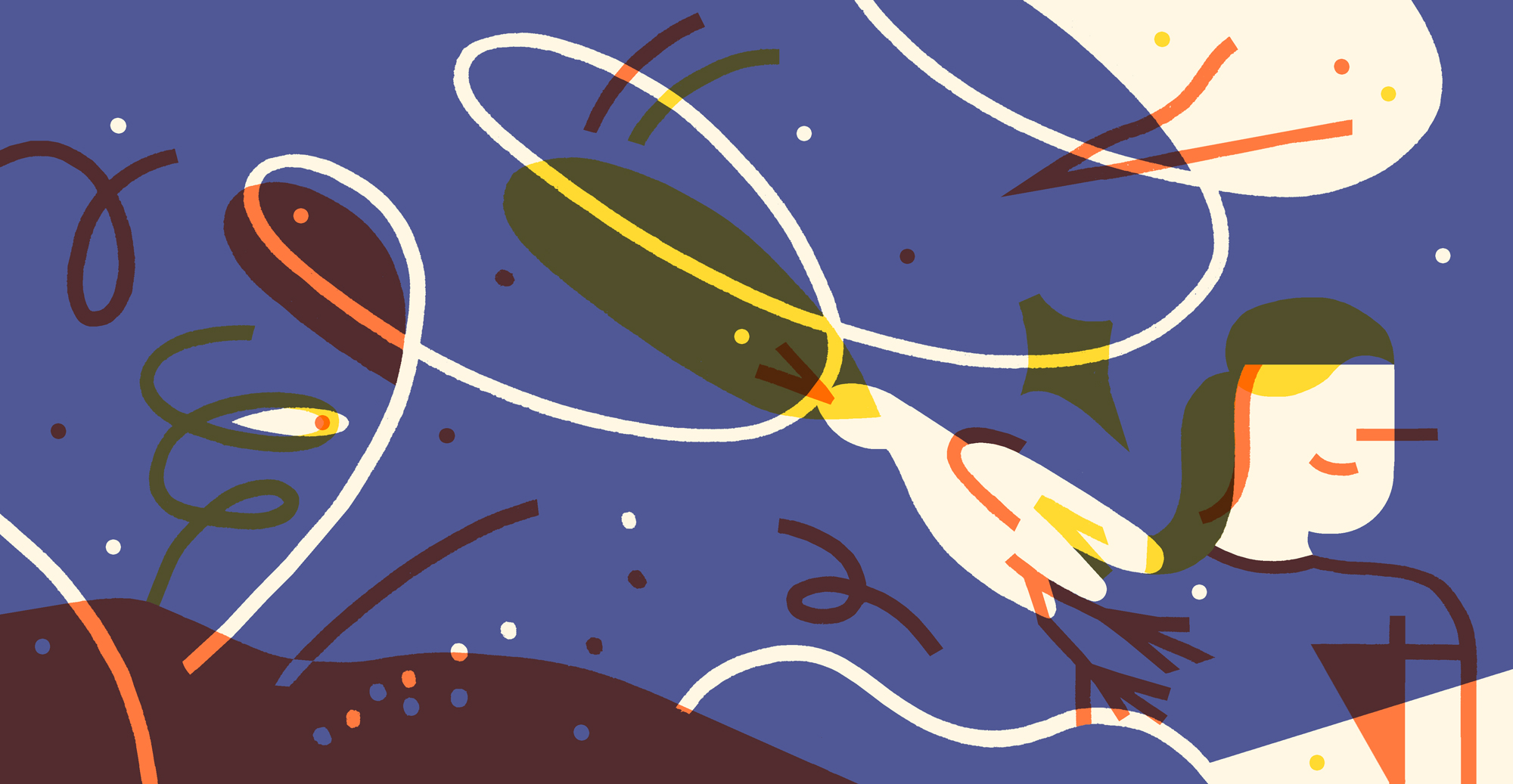 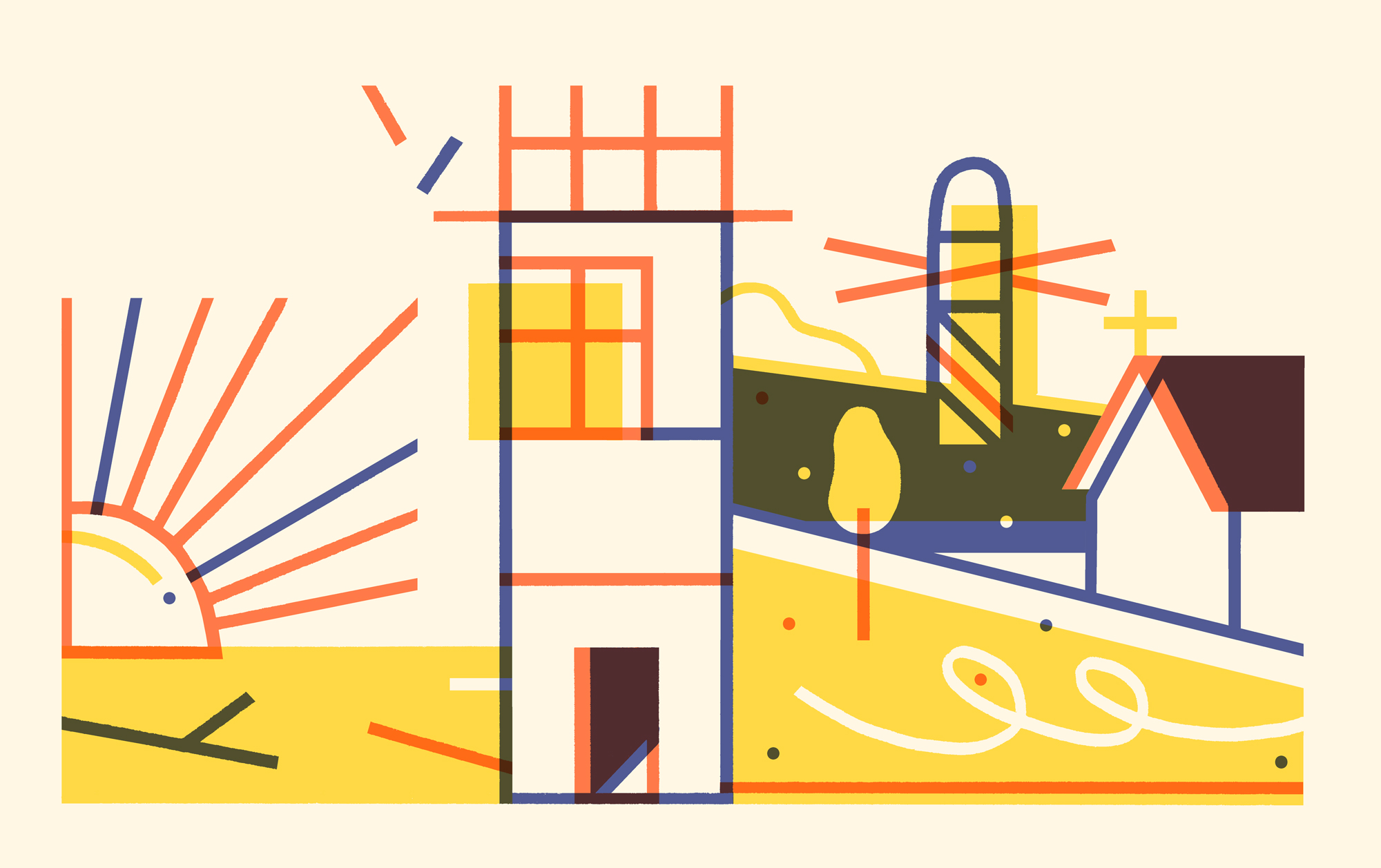 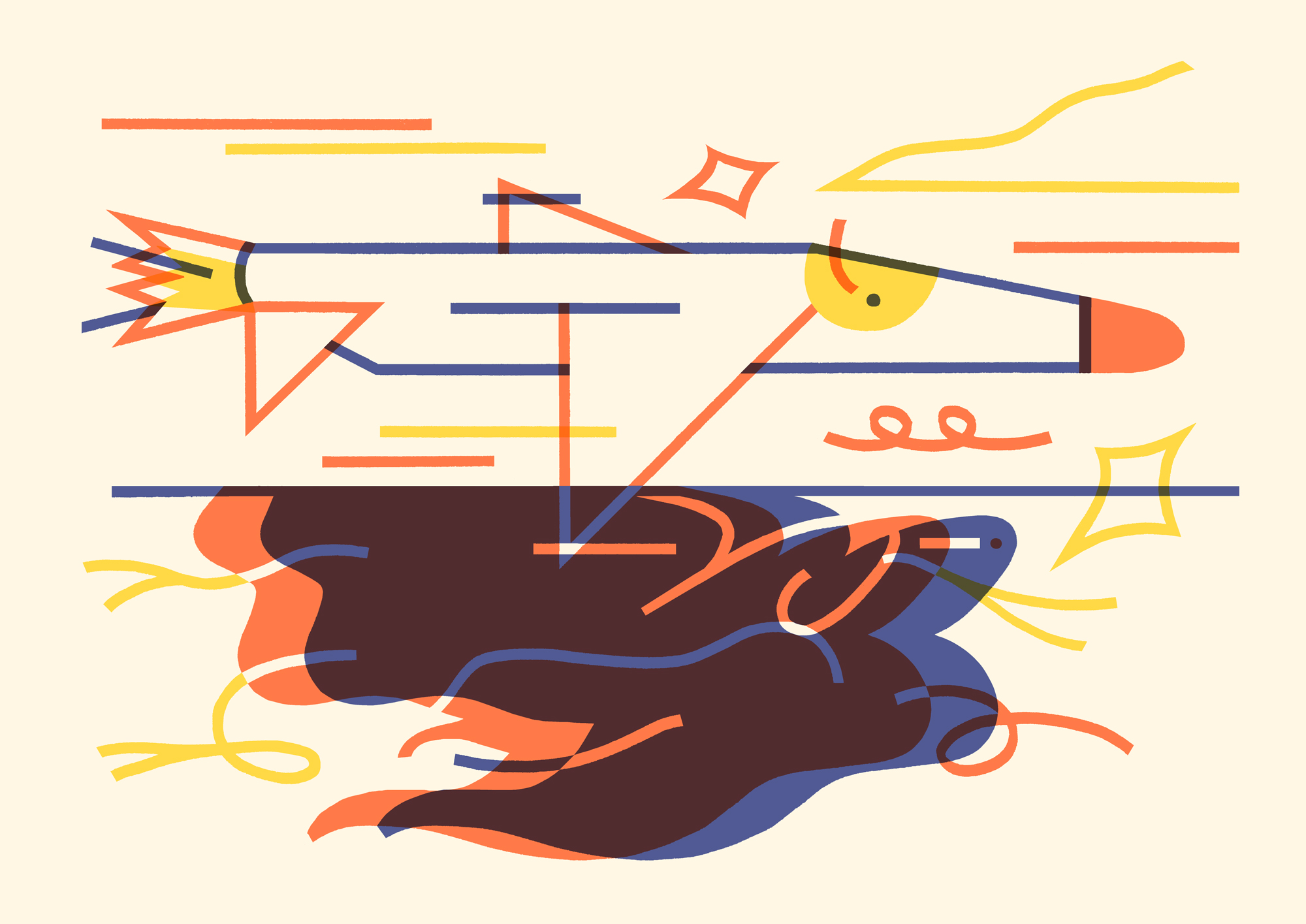 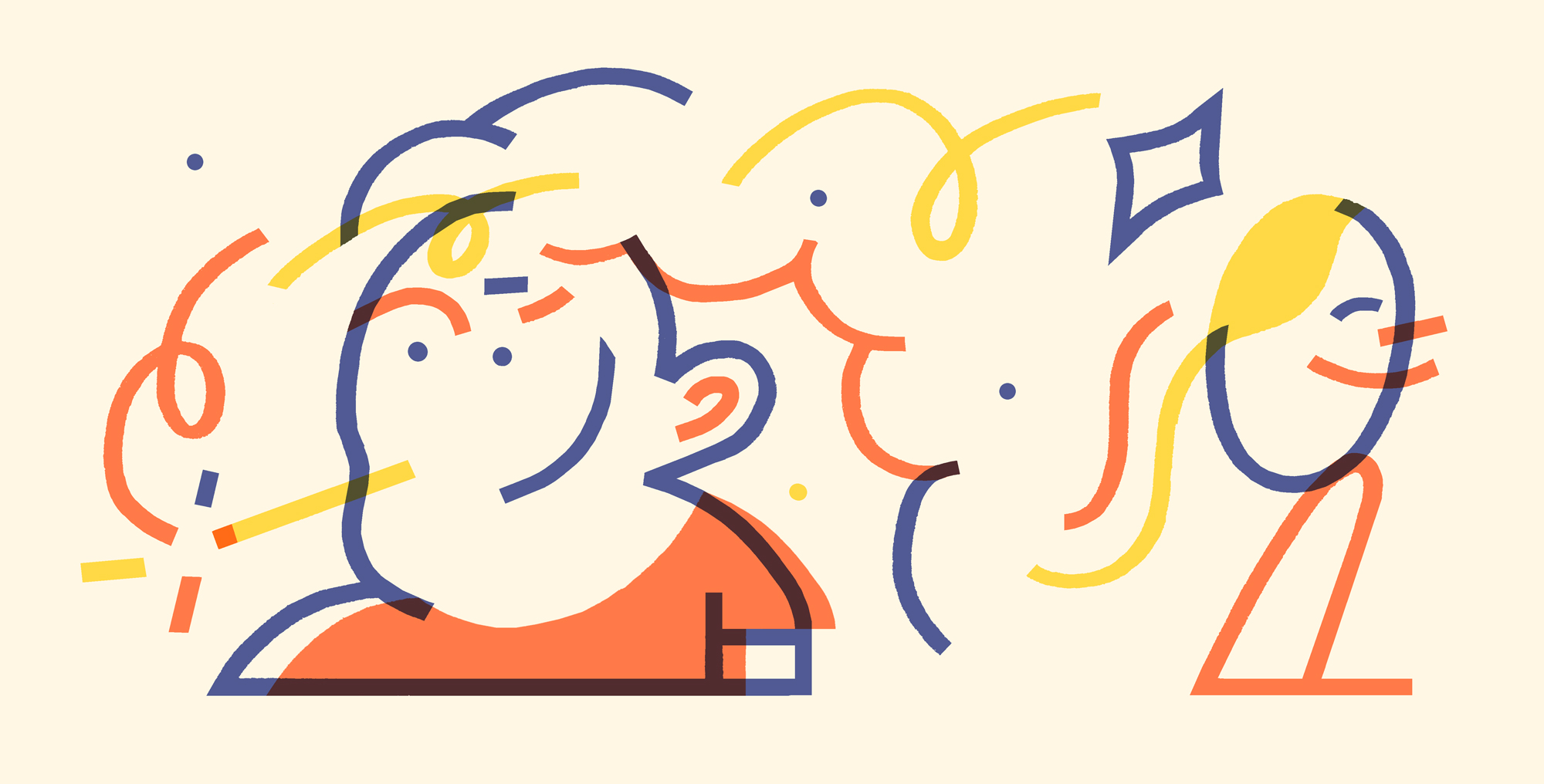 Could you take us through your creative process?
To be honest, I don’t really have one specific way of working or a standard process that I follow. I like to have an open mind when it comes to creating, and I absolutely don’t want to be stuck in the same routine, technique or style. However, I’ve noticed some recurring things that seem to be important to me!
The first thing that comes to mind is a little ritual that involves my working space. I like to start with a completely cleaned up desk, so most of the time I start with cleaning up. It gives me the feeling of starting completely blank and gives me space and room to think. The further I get into the project, the more my desk get cluttered with bad drawings, abandoned ideas, material test, dirty dishes and so on. When I’m done working I completely clean the desk again. A project really doesn’t feel finished if I don’t clean up after myself haha. It’s almost like a compulsive kind of thing, but I need this order in my (physical) life to sort the chaos that’s in my head.
Setting targets also play a big role in my creative process. For example, I’ll tell myself: “I’m not allowed to get lunch until I finish these lines.” That way I make sure I get my work done on time, but it’s also a very efficient way of working for me, especially since I’m working from home.

Do you have any recent or upcoming projects that you’re particularly excited about?
I’ve recently done a project for De Correspondent which I’m really excited about! I had the honor of kicking off a series called “De Boekenclub,” which is Dutch for The Book Club. The Book Club consists of three weekly episodes which are about one single book. For example, one episode can be a review, the next one can deepen out the theme of the book, the next one is more about the life of the author, and so on. My job was to contribute multiple illustrations to go along with the three episodes. I had complete freedom to do whatever I want, and I believe I’m at my best when people trust me like that. I ended up picking some visual elements of the story and made like an alternate reality/story that loosely followed the story of the book. It was a really great experience, and I got a lot of positive feedback on the illustrations! 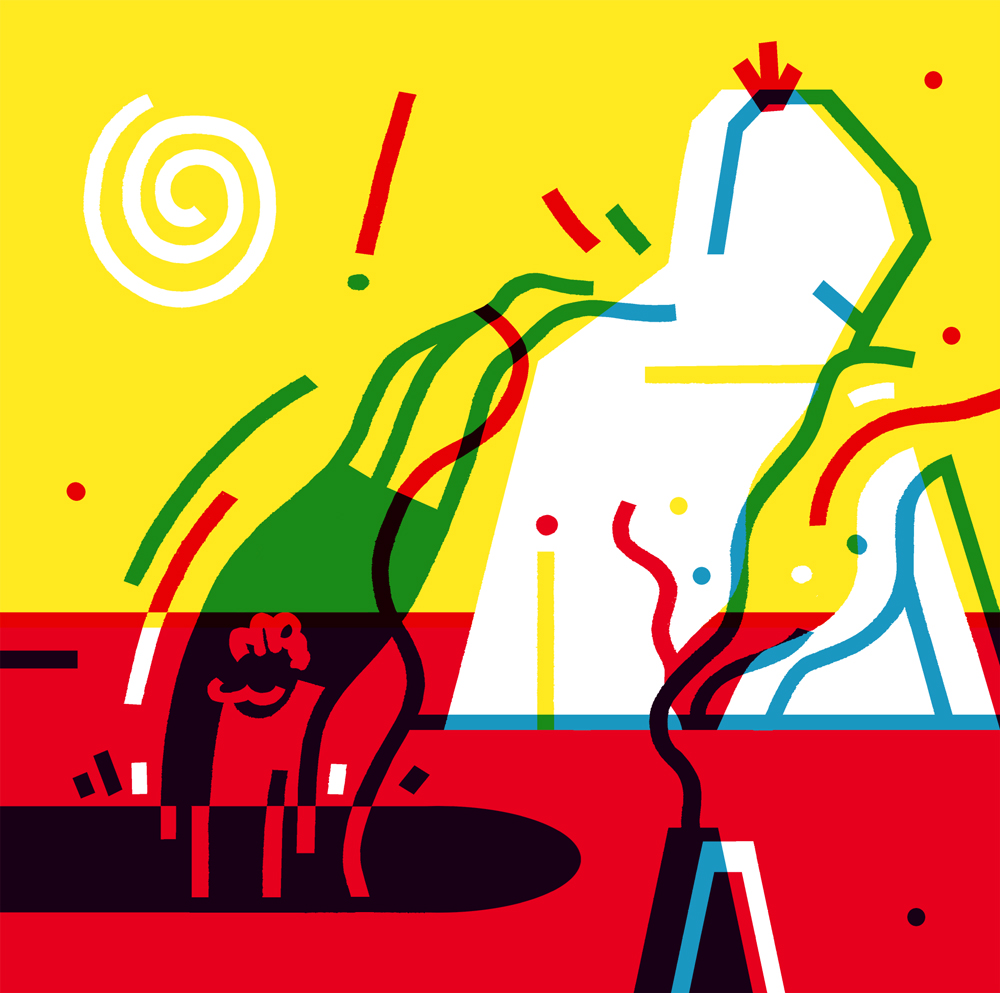 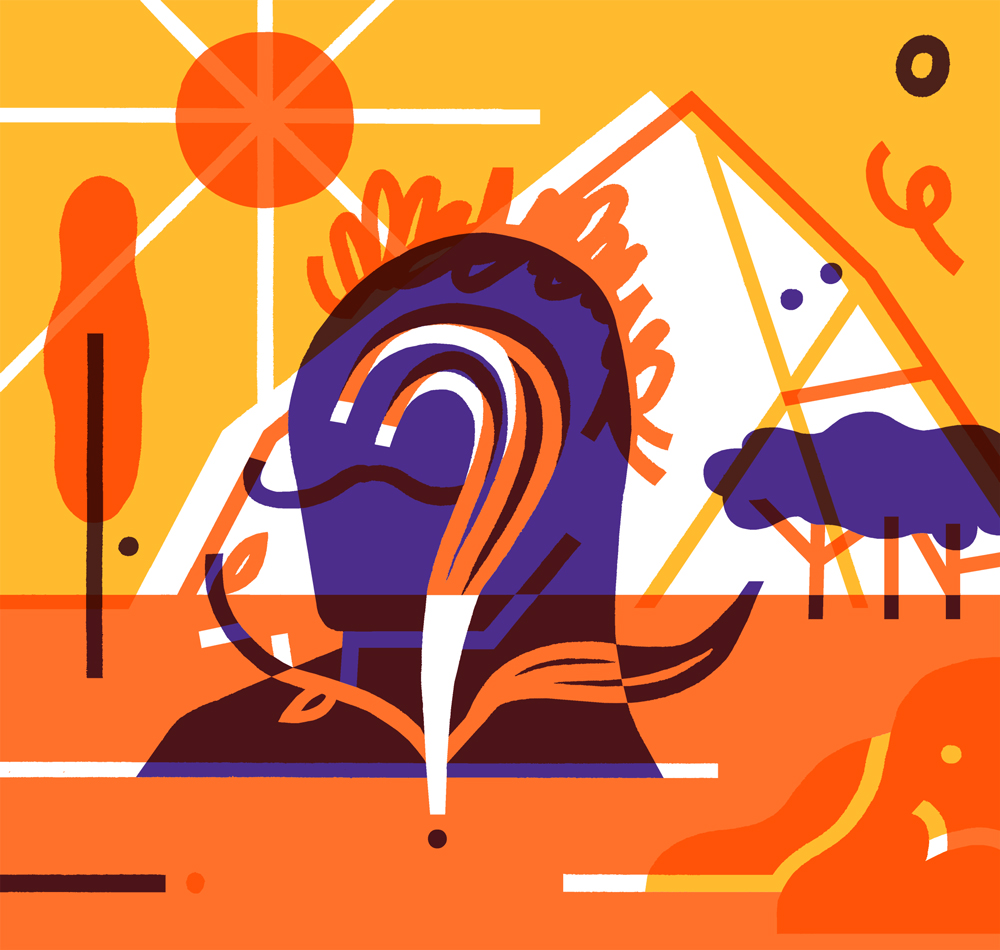 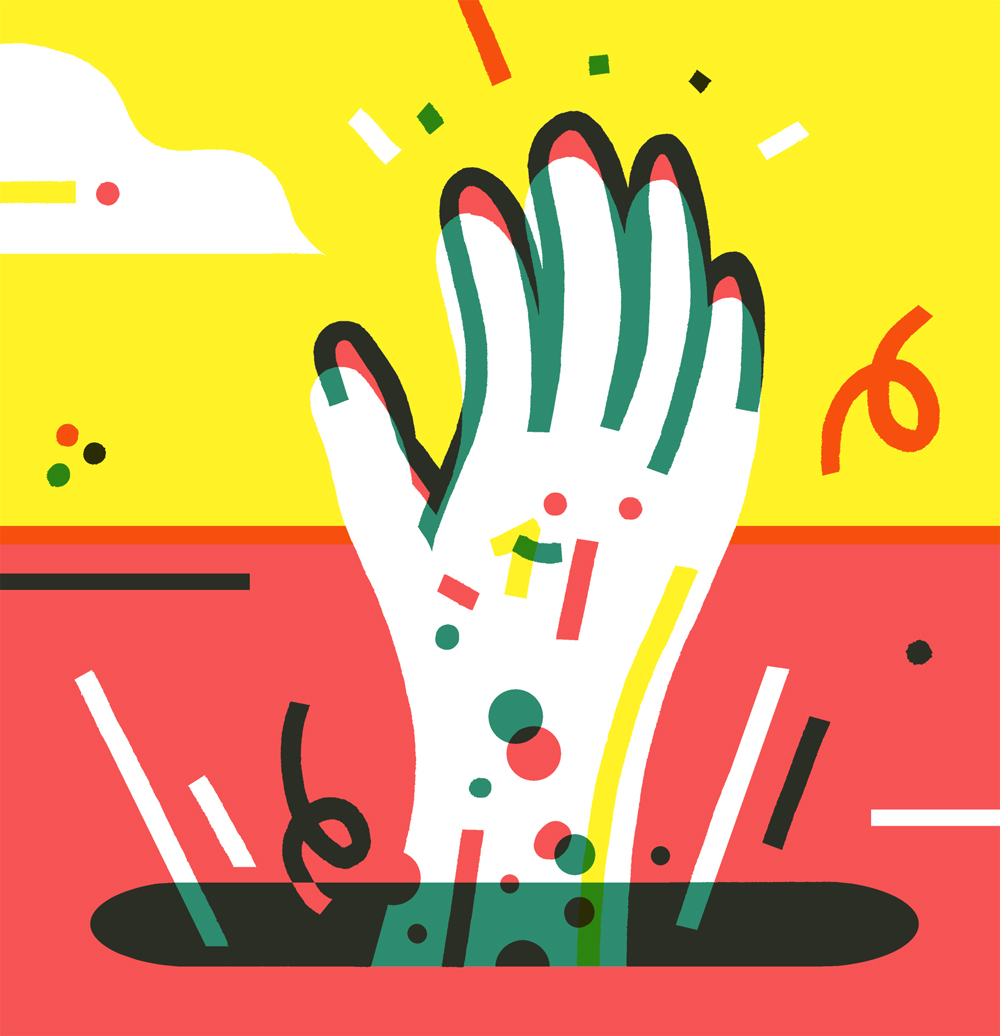 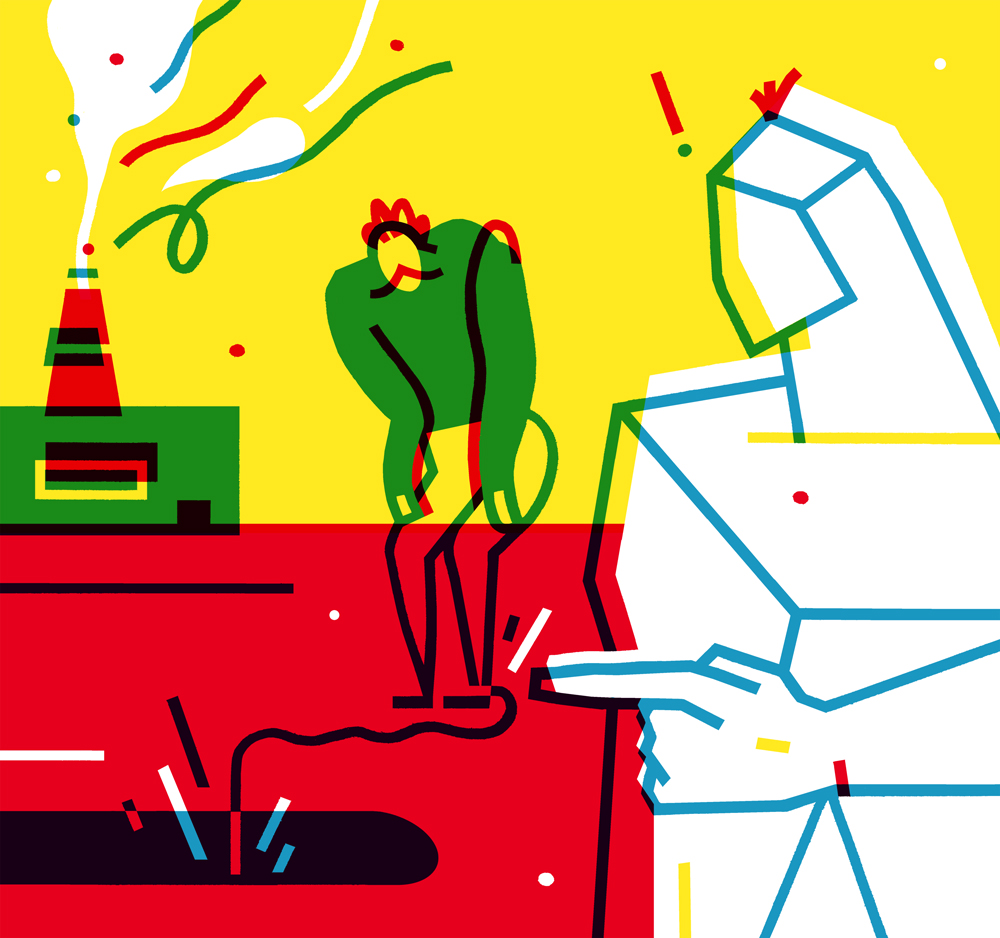 Can the creativity be learned later, or is it a feeling that is always within the human being?
I find that hard to answer because I started pretty late with illustration as you can read. However, I believe that every kid loves drawing when they’re young(er) and at some moment when growing up they kinda forget about it or stop doing it. When I was young, I was obsessed with dinosaurs, and I made little handmade stapled books about them and swapped them with a classmate. I also really loved drawing letters with fancy colored gel pens haha. So looking back, I guess I always liked to draw, but I think this is something that kids like to do in general.
At the same time, I believe that my style or the things that I’ve “achieved” so far is the result of really hard work – I don’t believe in talent at all. What I’m trying to say is that you can get good at almost anything you want, if you’re willing to put the time, energy and love in it.

How do you start your day? Do you have any daily routines?
I like to get up early; I’m at my best when I wake up at 6:00 AM. I also like to go to the gym early, which is something I picked up like two years ago. I was working so hard and sitting behind my desk the whole day, which eventually made my back hurt really bad. I kind of made a promise to myself that this hard working is only acceptable if I take care of myself, so that’s why I started going to the gym. Besides that, it’s also a great way of clearing my head. Since I’m working from home, it’s good to get away sometimes, as a matter of fact, most of my ideas come when I’m not at home 🙂

What time of day are you at your most productive?
I’m like a daywalker: I get up really early and go to sleep late haha. I don’t need a lot of sleep! However, the more experienced I get, the more I’m finding weaknesses and strengths of my process. I found out that certain tasks can be best executed at certain times. For example, when I need to think of an idea or concept I’m at my best when it’s early. Once I get more into the process I love working at night, the quietness is great, and it’s such a lovely, dreamy atmosphere. So I guess it depends on the task, but generally I’m pretty productive. 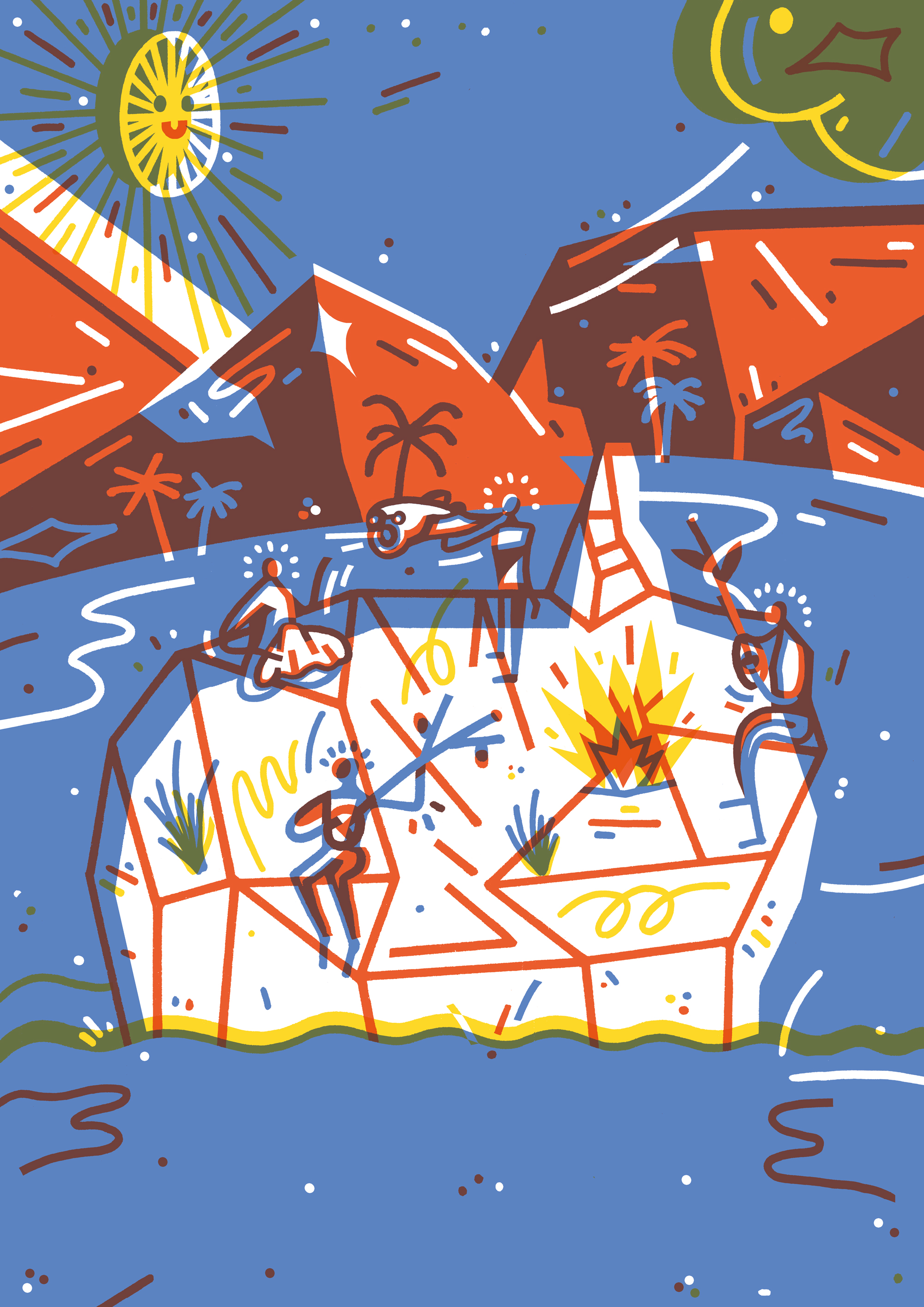 Could you tell me what your workspace is like while you are working? Are you listening to any music?
I prefer working alone, and I absolutely love working with headphones, it’s the only way for me to get completely in my own zone. I never work without listening to music, and I love having a (short) playlist on repeat. I also really like having one single song on repeat, it’s sort of hypnotizing to me haha. I’ve had a lot of times where I listened to the same song for a couple of hours in a row!

How do you keep yourself inspired?
I think that my inspiration comes from continuously creating. When I’m not working for a client, I’m working on personal work. I’m always trying to discover new ways of approaching / communicating ideas, and I like trying out new techniques and ways of working. My personal work is almost like one big process where I try out new things, figure out what’s working for me and what’s not and take the things I’ve learned to a new work. This continuous cycle of creating is really important to me and forces me to rediscover myself and keeps me inspired to keep creating.

Who are some other artists and illustrators that influence you?
I would be kind of silly to say some names because I’m not directly influenced by any specific illustrator/artists. I’m influenced by things that I see, either on the internet, in books, in music, dreams or even on the street. What I’m trying to say is that I’m not necessarily inspired by illustrators but by images in general. To me, it all comes down to the same things: shapes, composition, and use of color. Sometimes I take photos of stuff I see on the street just to sample the colours for example. Of course, I have personal heroes (Picasso and Miró are two that come to mind), but at the same time, I don’t try to hold on too much to this sort of stuff.

If you could have dinner with anyone (dead or alive), who would it be?
I would love to have dinner with Young Thug – for the people that don’t know him; he’s a very alienated, young and experimental rapper with a unique style from Atlanta, Georgia (USA). I imagine it would be really hard and bizarre to have a conversation with him because he mumbles a lot, makes these silly noises and uses a lot of slang, so I’d definitely be up for that haha. I also read that he smokes a lot of weed so that would probably result into a very enjoyable dinner too!

Finally, Is there something you wish interviewers would ask you but never do?
I haven’t done many interviews yet, but I like having questions like the one above! I like it when questions also get a bit personal and are not completely work related.