“I’m more connected to the female portraits and find them most inspiring.” 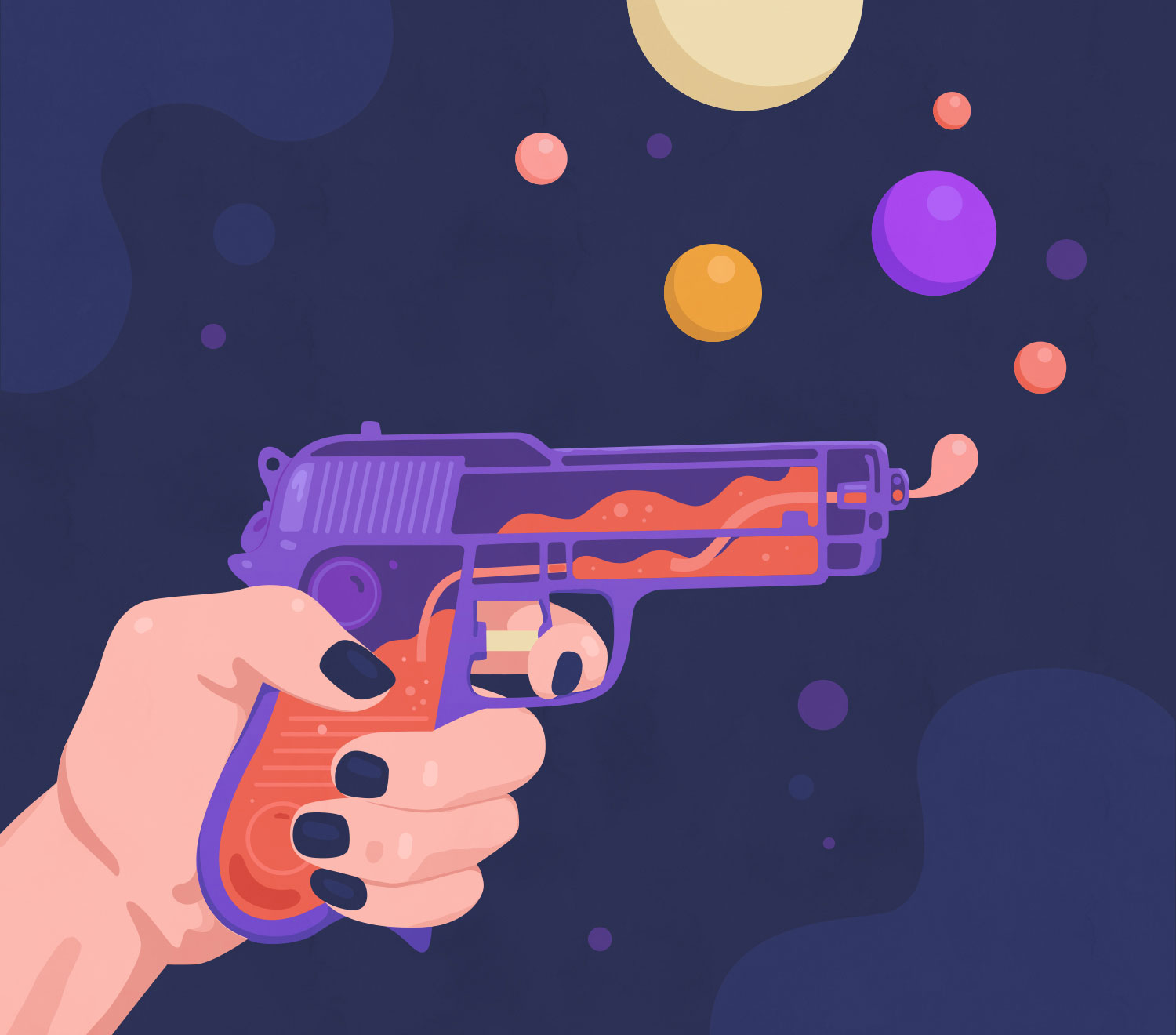 Hello, Petra!
How would you describe yourself – who is Petra Eriksson?
I’m a slightly introverted, visually creative person. I’m also a person who has a hard time staying in the same place for too long but at the same time loves routines. I usually just say that I’m a compulsive drawer and professional tea drinker, which is pretty much true, but I’m also a person who thinks that lifting really heavy things is fun and who aspires to become a little bit more like Iris Apfel (though I must say that I have a pretty long way to go).

Could you please tell us a little bit about your background and the path that led you to where you are today?
I grew up in a suburb of Stockholm with my mum. Our apartment was always a bit of a creative chaos but a very warm and inviting place to grow up in, and since her social life has always been big there were always other people around.

I was very shy as a kid and spent a lot of time drawing and creating my own imaginary worlds, something that I guess has become a constant part of my life. I started taking extra art and design classes from the age of 15 and since then that has been my main path. I went to art school for a while, worked for a while, escaped Stockholm for Dublin, returned to Sthlm to study graphic design and then I moved to Malta to start my creative career. That’s the short version. But some of the cornerstones in my life leading up to where I am today is moving to Dublin when I was 20 and felt a bit lost in life, even though it was tough it opened up the world to me which I feel has affected me a lot. Then when I started studying graphic design I felt like a lot of my confusion about what to do with life disappeared. Even though I had enjoyed my art studies I didn’t feel like I was on the right path until I started studying design. Moving to Malta to start working for a small startup there was a great way for me to start my career. Sometimes it was chaotic but mostly we were all given loads of flexibility and freedom and I got the chance to take responsibility for projects that I was interested in and build my confidence from there which definitely affects how I live my life today. 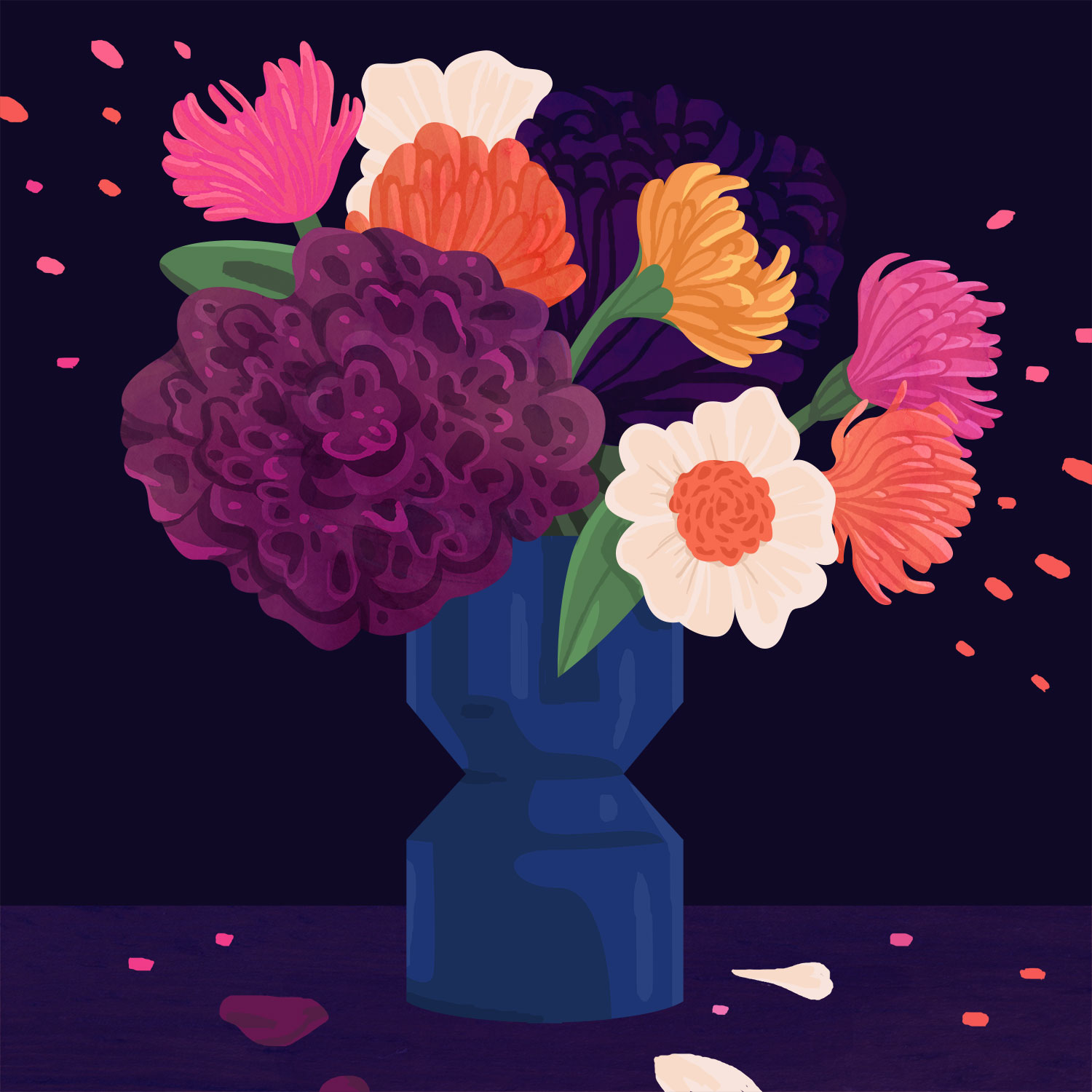 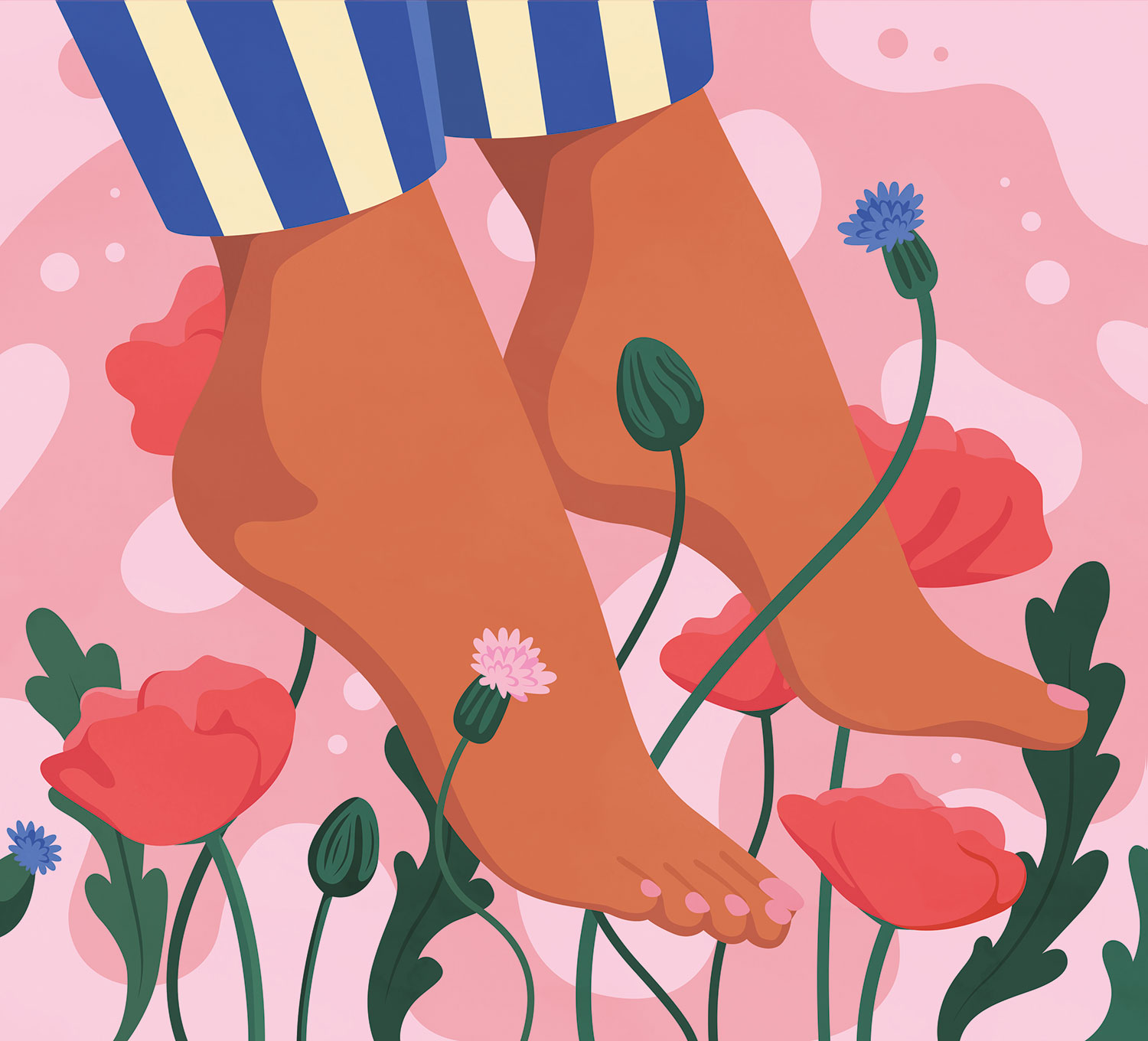 What are some of your earliest creative memories?
One of my earliest creative memories is being at my family’s cabin in the northern parts of Sweden during the summers and looking at the things my older cousins were drawing and then trying to copy that as best as I could and then after the summer try to impress the other kids at my kindergarten with my impressive princess-drawing-skills

How would you describe your relationship with colours if you had to?
Colours are extremely important in the work I do and I spend a lot of time trying to find a good balance between them in my images. Almost all of my works are colorful but there’s usually one or a few more tuned down areas of the image to ground the image. 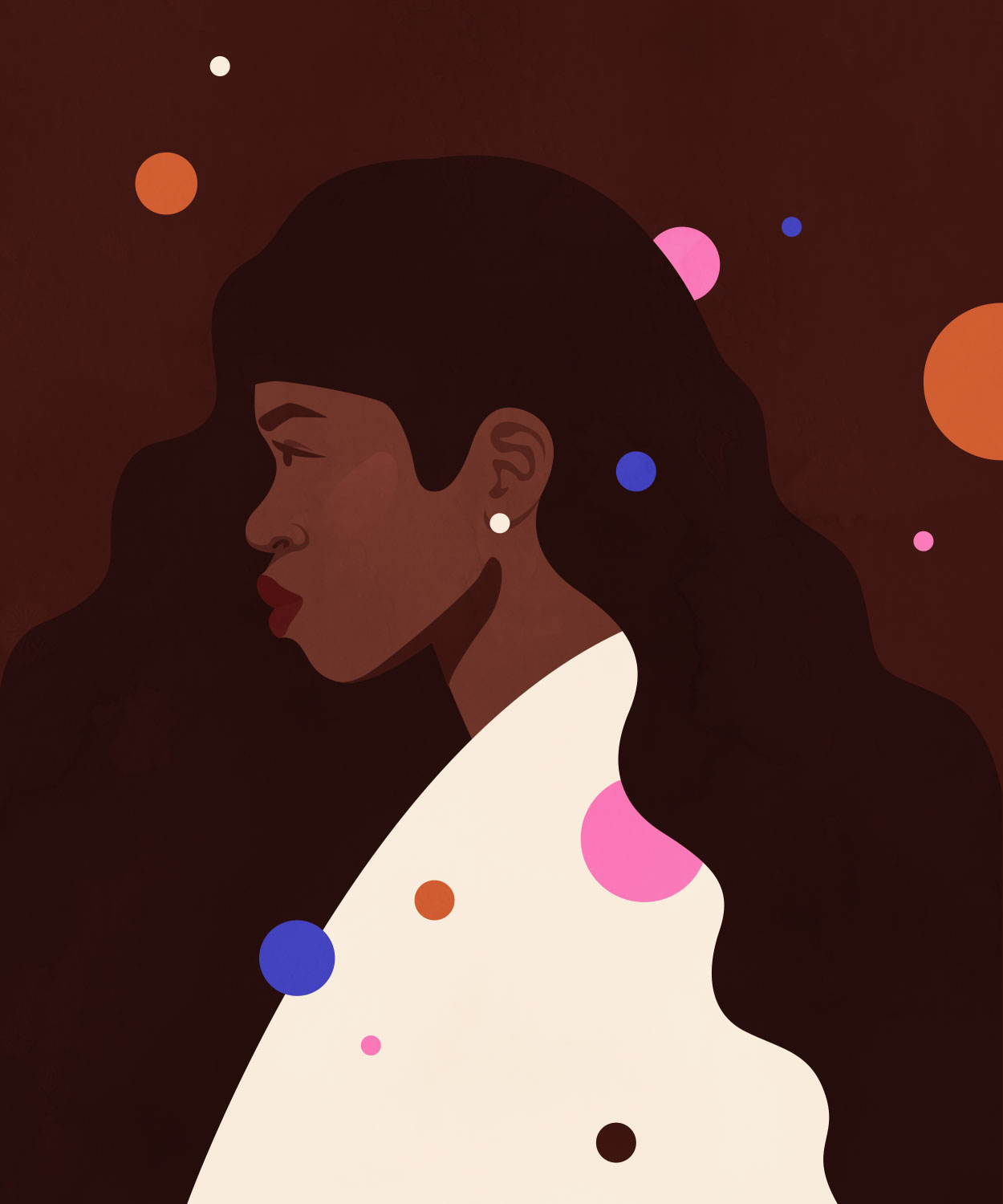 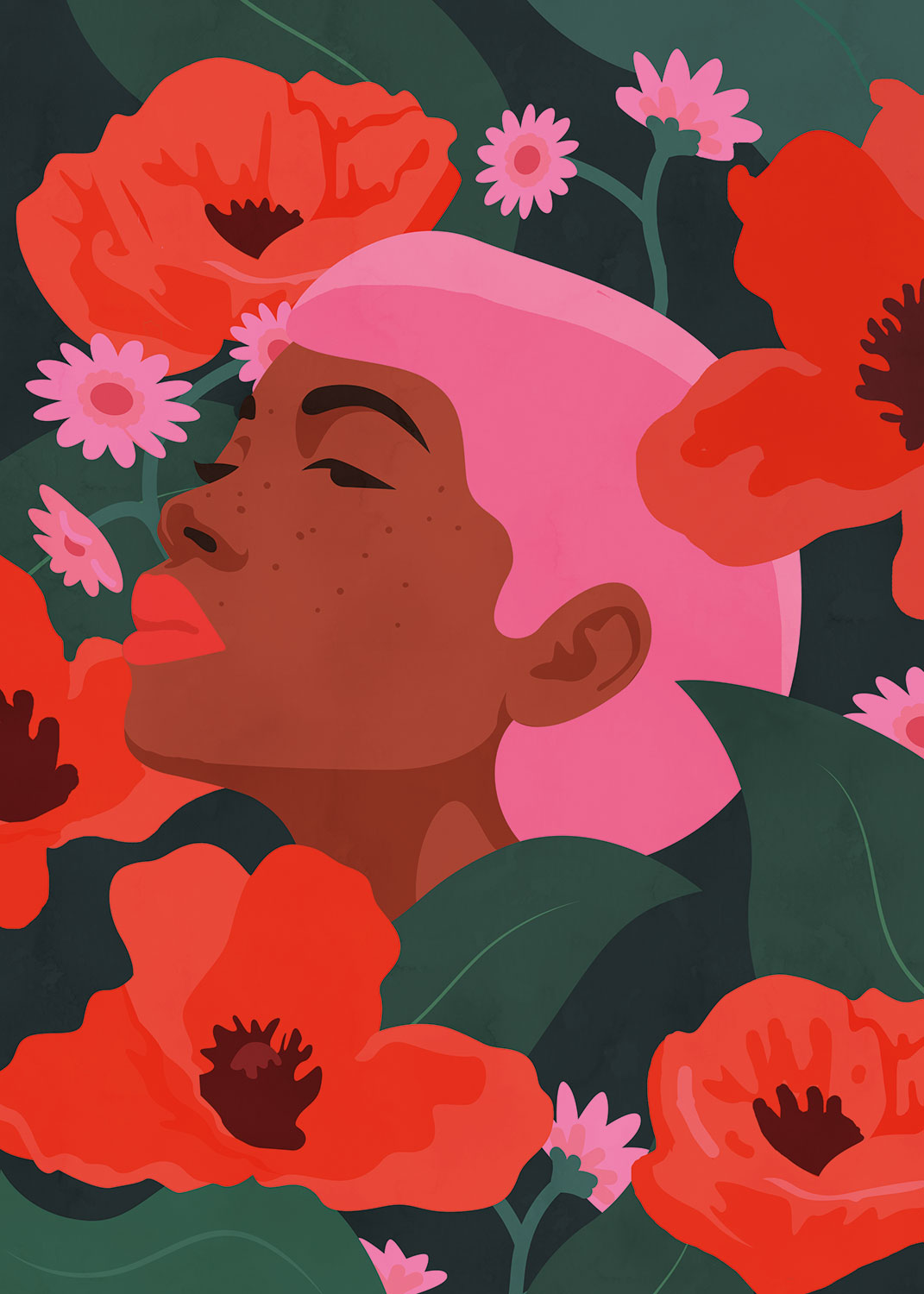 Do you have any specific reason to draw mostly female portraits? How do you choose or find the characters that you want to draw?
I think I do that for several reasons, mostly because I’ve grown up in a place where I was mostly surrounded by women and in many cases, it’s their stories and the way they dressed or expressed themselves that has inspired me. I don’t think it’s only because of that but for some reason, I’m more connected to the female portraits and find them most inspiring. When I draw men I usually add accessories or create features which are more to the androgynous side (if it’s not a portrait of a specific person) so I think I just find that expression to be more fascinating for me.

Can the creativity be learned later, or is it a feeling that is always within the human being?
I think that everyone has some kind of creativity within them, but that not everyone finds a natural (or even necessary) way to let it out. People can be creative in so many different ways and I think that some people might not realize how creative they are, but I also think that many people are blocked in some way. I think everyone can develop in this area, even later in life, though I don’t think it’s about learning how to be creative as much as finding their own creative way and letting it out.

What are your top five songs on your playlist?
Tough question. I’m a person who usually gets stuck on a song and listen to it all the time for two weeks and then gets tired of it and can’t hear it for six months. Five songs that are on my top right now are:

The film that speaks most to your aesthetic?
I would love to be able to step into any of Wes Anderson’s films and I also think that the colors and details in Hayao Miyazaki’s movies are absolutely fantastic but there’s something special with the photo in Lost In Translation so I think I need to pick that one. 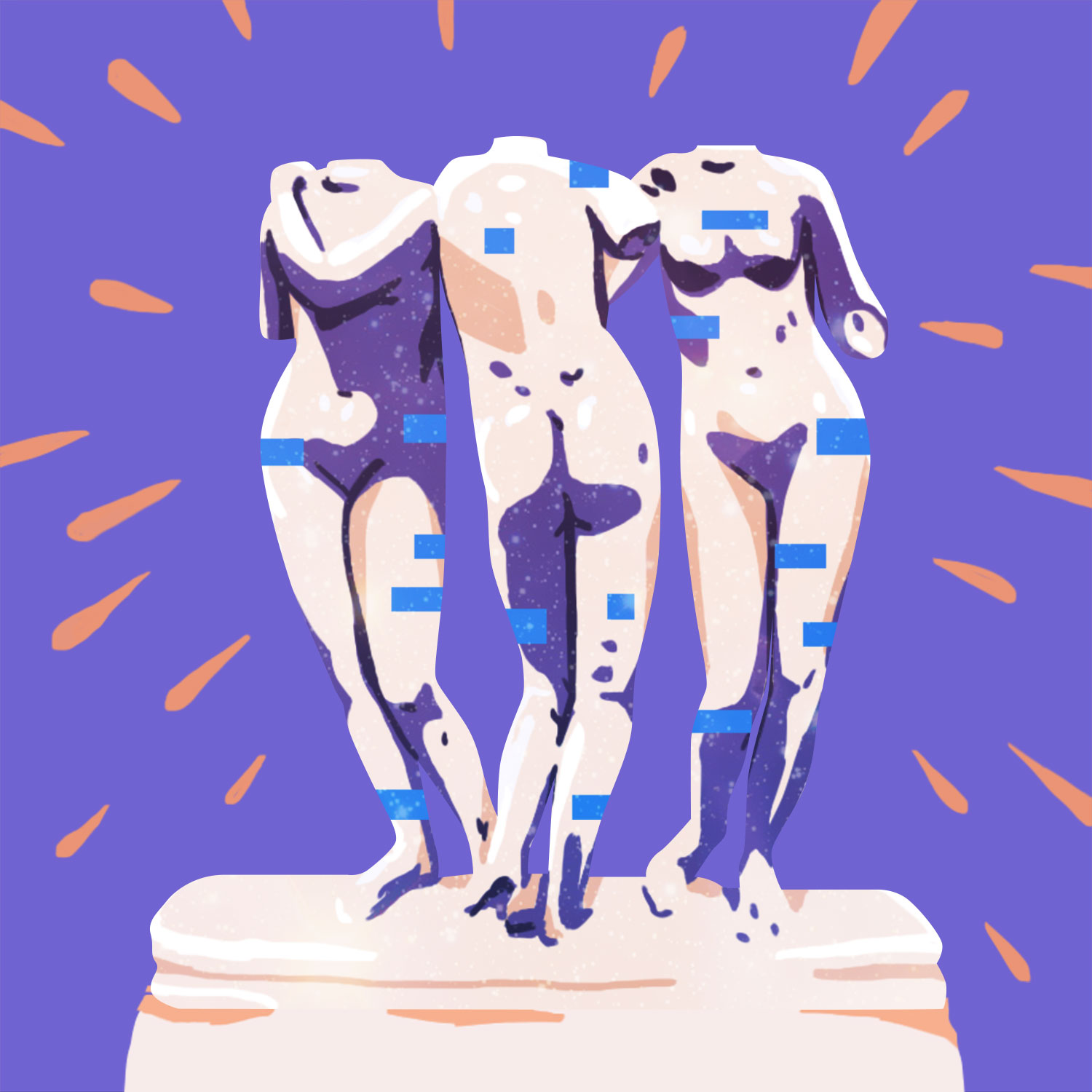 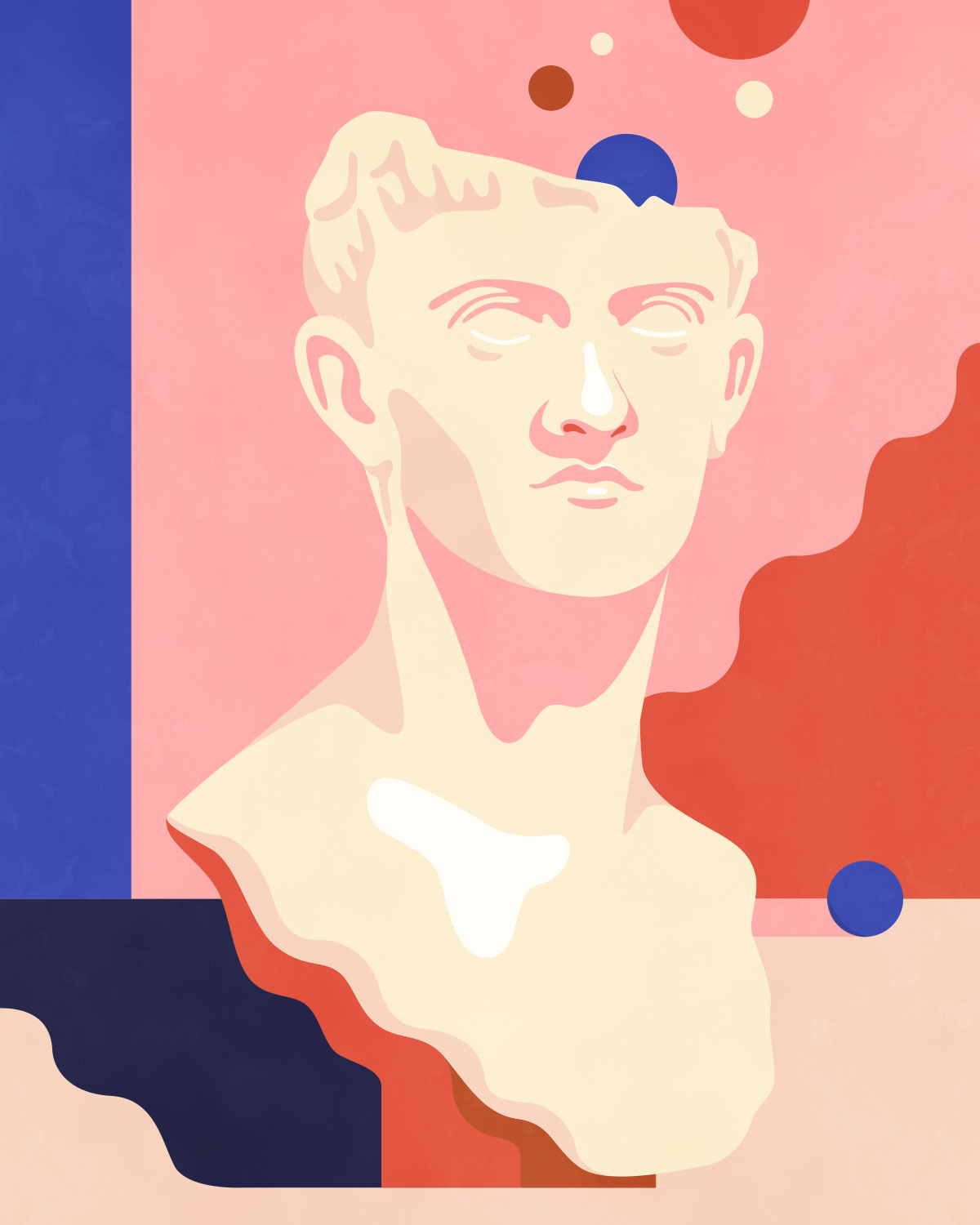 What other illustrators/animators are you digging these days?
So many. A few favorites are Merijn Hos, Karan Singh, Lotta Nieminen and Janine Rewell.

What are your three must-read design books/blogs/ podcasts?
I don’t know if I’ve ever read a whole design book, and I don’t follow any specific design blog but I have listened to quiet a few episodes of Design Matters with Debbie Millman, I would definitely recommend that one. Otherwise I believe in just reading about other things, fiction, interesting biographies etc. I think there’s a lot of things in there to bring into your creative world.

Could you give us three fun facts about yourself?
– I have a license to drive a forklift truck.
– I like lifting heavy things
– I absolutely hate coffee 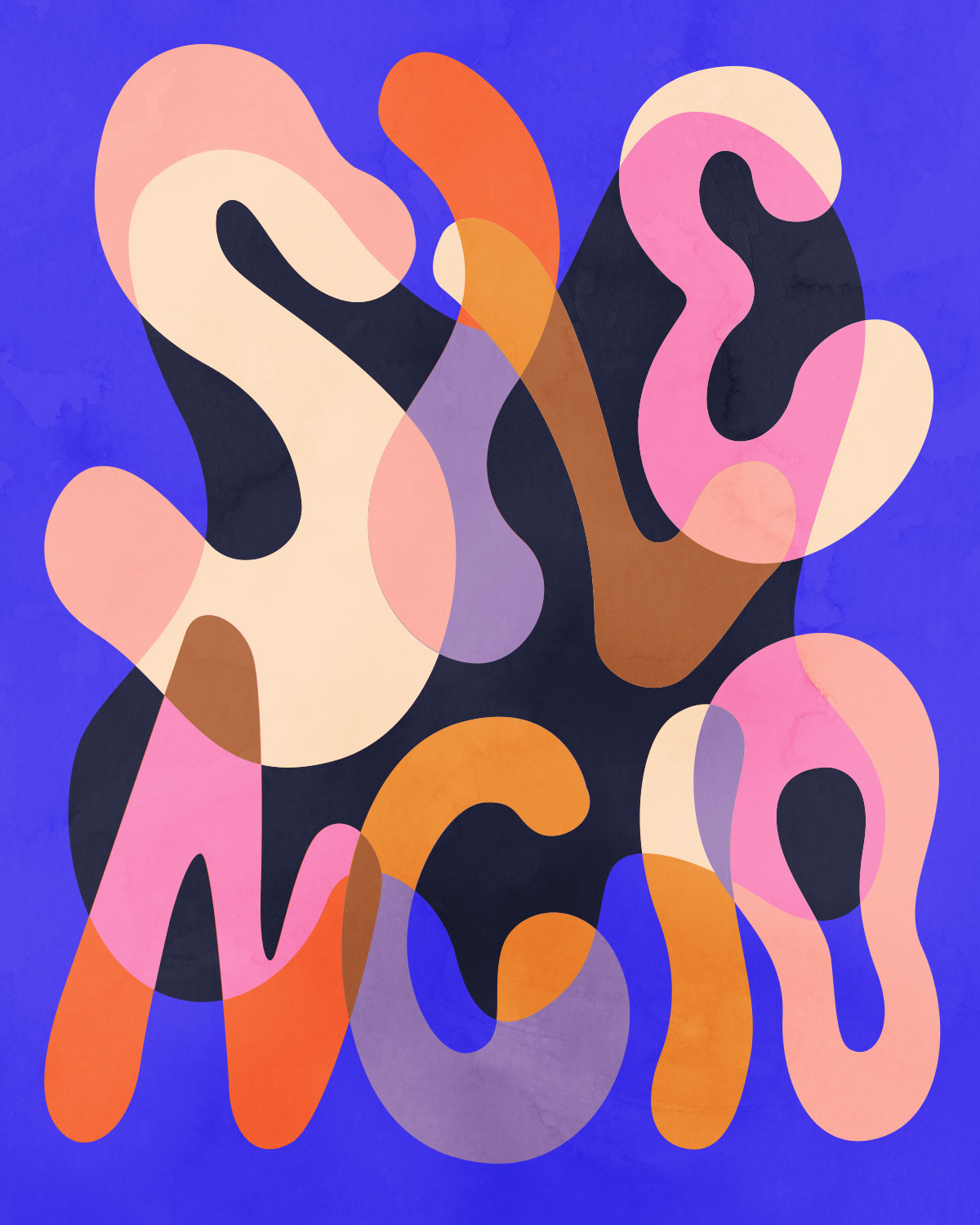 You studied & worked for a while in Stockholm. Now you landed in Barcelona. What drew you to Barcelona?
I actually didn’t go directly from Stockholm to Barcelona, it started with me getting a job as a creative for a company based in Malta where I worked and lived for about 1,5 years. When I started to panic about the life on a small island I escaped to Berlin for a while and then the plan was to maybe continue just traveling around for a while but then my company was just opening up an office in Barcelona and asked if I wanted to go there instead, which I did. I kept working for the company for about six months after arriving to Barcelona and then kicked off my freelance career. So I hadn’t really thought that much about Barcelona as a potential home city until then but I immediately liked it and felt at home there. I don’t think it’s the last place where I will live but I definitely think that it will be my base for a long time.

What artistic inspirations have Barcelona given you that Stockholm wasn’t able to?
Life is very different in Barcelona. For me it’s not so much about the visual parts, both Stockholm and Barcelona are beautiful cities in their different ways, but the culture in Barcelona is more relaxed which I feel is good for my creativity. In one way it’s hard to compare the cities as my life looked very different when I was living in Stockholm, but I still feel very strongly that Barcelona suits me better right now. Things are more spontaneous, not as strict and people just seem to enjoy their life a bit more. I also feel like the work-life balance is a bit better and that people manage to be driven and focused without forgetting that spending a whole weekend at the beach or drinking vermut in a sunny square in Grazia are important parts of life too. 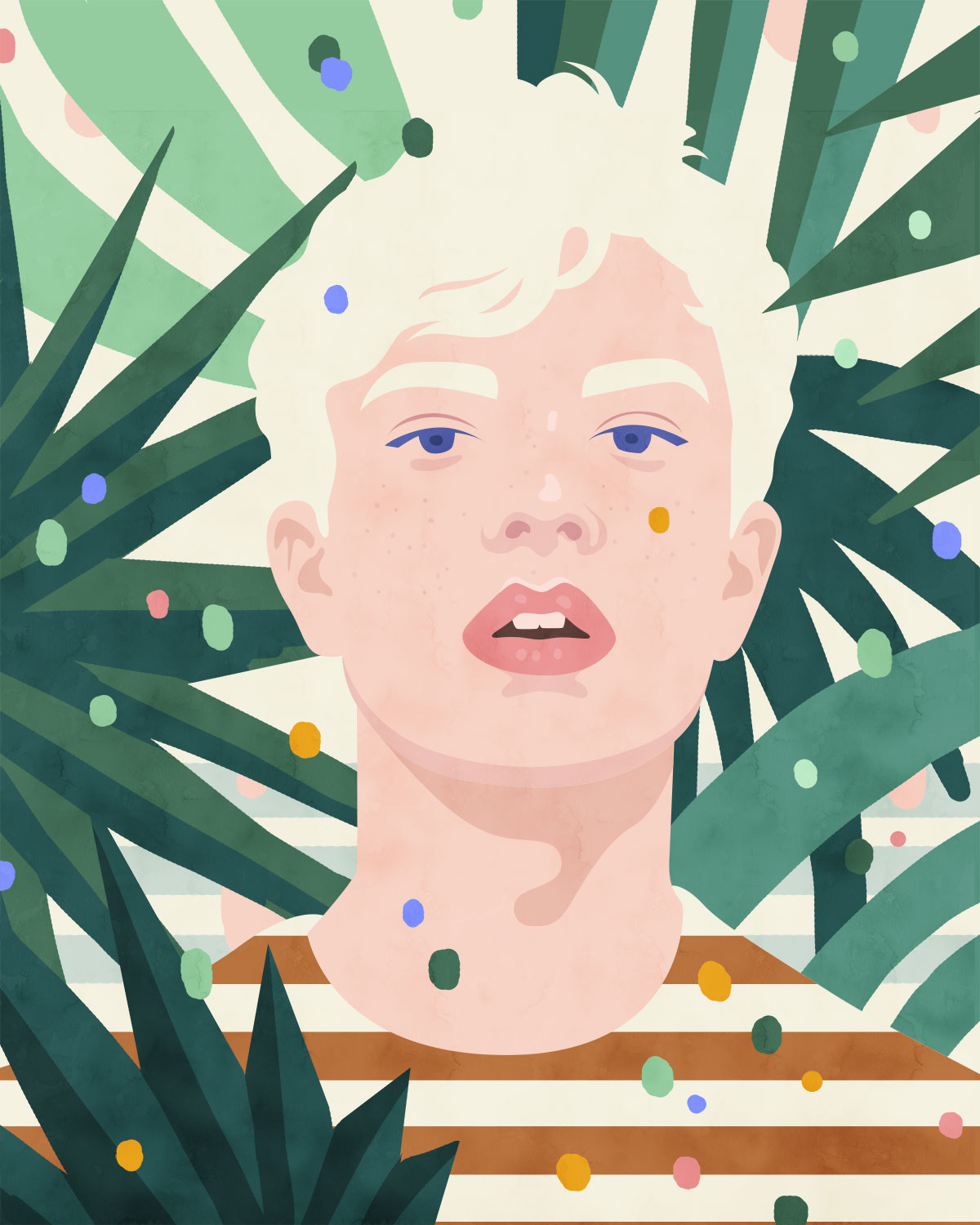 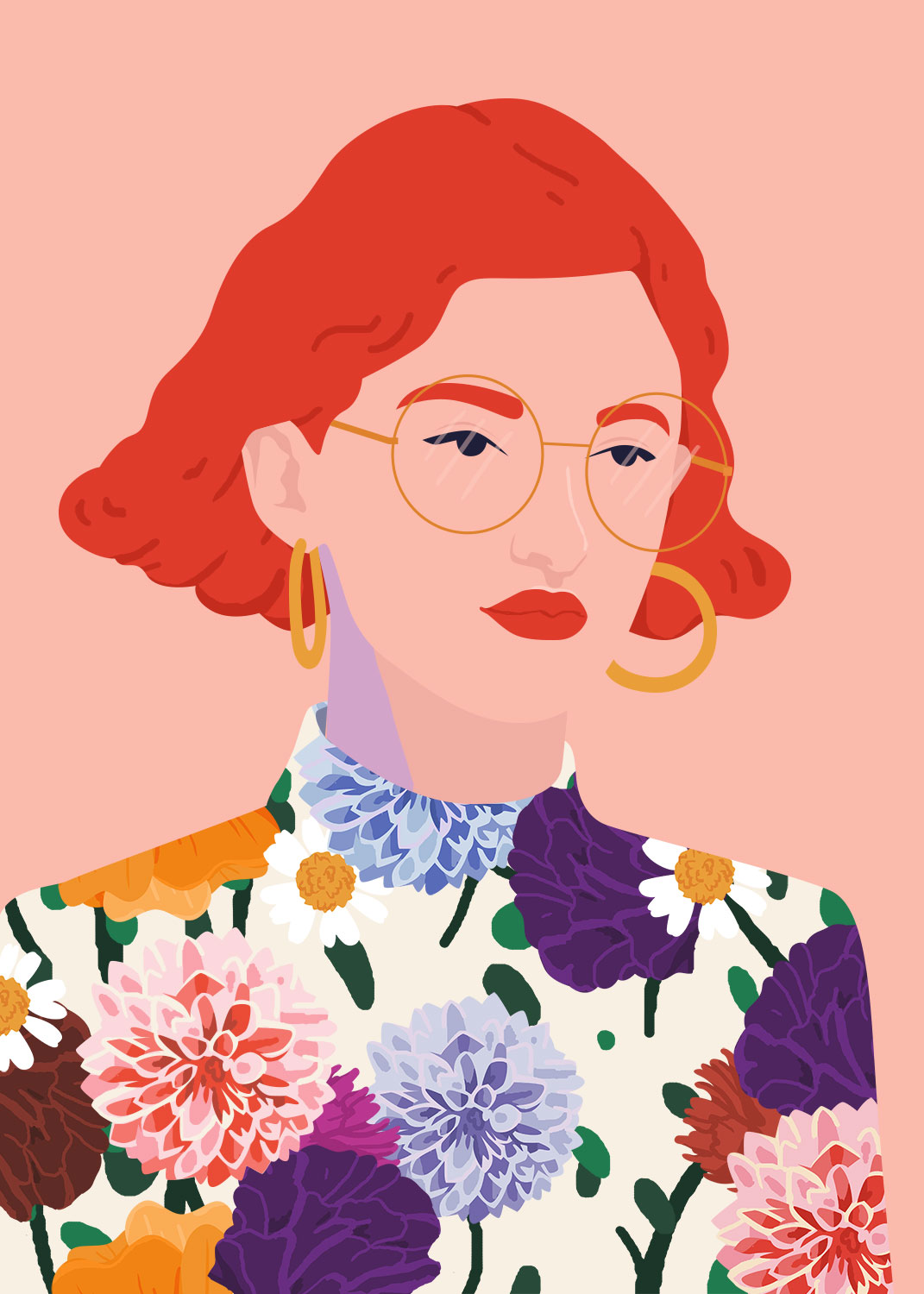 Where are your favorite spots in Barcelona? Food, coffee, shops, etc.
For weird but great drinks I would go to the half hidden bar Paradiso. For the perfect lounge experience I would head to Casa Bonay and their Libertin Bar. 33|45 is my local place, great for a vermut/beer or even some tea in the afternoon when the place is usually empty. The Juice House has some of the best breakfast options in town, perfectly hidden away in my favorite area Sant Antoni. For dinner I would either grab some alternative tapas as Colmado in Grazia or head to The Green Spot, my favorite vegetarian restaurant in Barcelona. A great afternoon break with tea/coffee/treats can be found at Espai Joliu or Satan’s Coffee. For more arty experiences I would recommend Fundación Miró and if you’re in the mood for lifting some heavy things you should go to Crossfit Eixample. 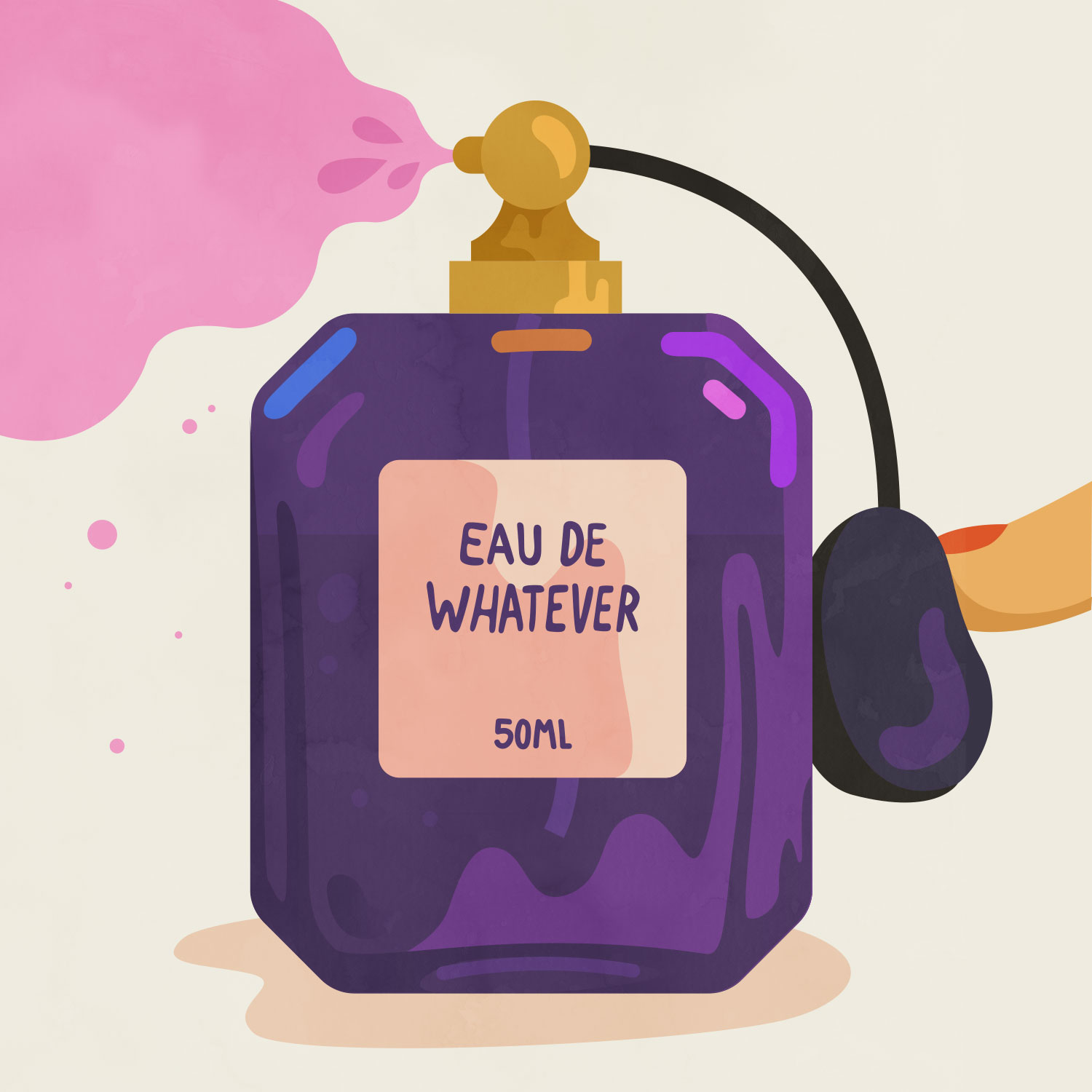 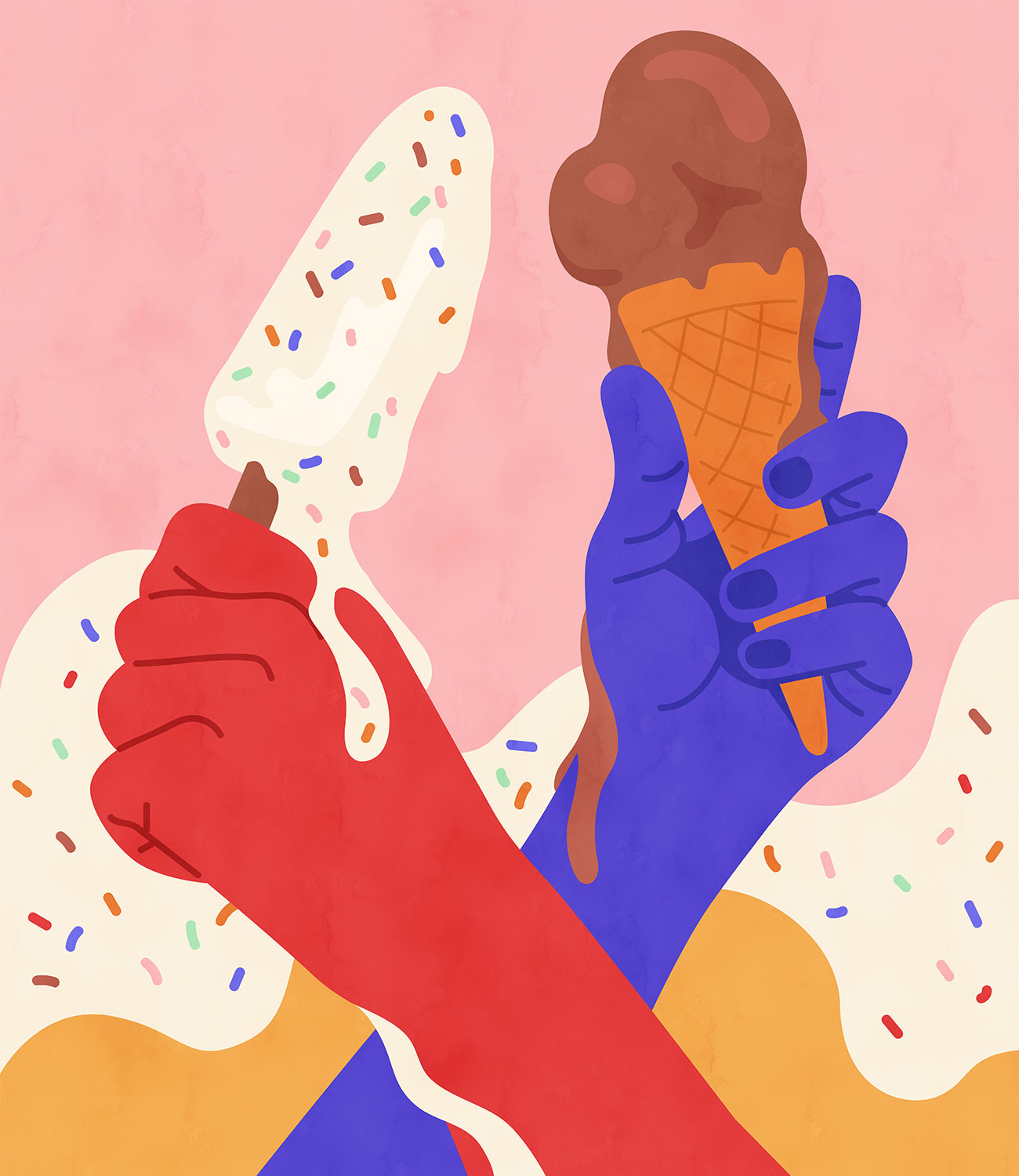 Last but not least as we know, you will give a talk at OFFF Barcelona. Are you excited about that? Could you also give us some hints about it? Can’t wait to listen to your talk there!
I’m very excited but also pretty fucking scared. I’ve started writing my talk but I need to organize and polish it a lot more. I’ve been trying to think about some of the talks that I’ve heard and what I’ve enjoyed hearing about in those situations. My plan, for now, is to focus a bit on the journey leading up to today and try to be open with times when I’ve felt a bit lost and confused with what I’m doing. The plan is to lead up to what I do today and the things I’m still trying to learn. There will probably be a part about colors and how I work with them as well as several people has requested that, but I need to fit it into the rest in a good way.