Owen Davey, is a freelance illustrator based in Brighton. He is the illustrator for most of popular app TwoDots. His work is full of fun, colour, cool style, and playfulness. It was first time that we came across his work ” Laika the Astronaut”we were was totally in love. And now we feel lucky to have a chance to do this interview. Don’t miss to read the interview!

Hello, Owen!
As I know your work spans editorial print illustrations, book cover, animation, branding, and more.  Are you sometimes surprised by your own career? How did it actually begin?
Not really. Mainly because it’s been a fairly slow process with lots of hard work and a gradual progression. I started with editorial and books because they’re the work people were willing to entrust to a new illustrator they’d never heard of. Then over time as my profile has increased, I’ve gained some advertising and branding jobs which are cool. I love working in a variety of formats. It keeps things interesting.

You have a very distinctive illustration style. When did you start developing your signature style? And how do you describe your working style in three words?
I’ve been working on my ‘style’ forever I suppose. I’m constantly trying to improve upon what I’ve done before without reinventing myself. It’s a gradual improvement I think. If you look through my old and new blogs, I think you can discover the changes to my work over time and see new ideas develop, etc. I don’t think I’ll ever be completely satisfied with one approach, so I think my style will always shift a little. Geometric, Simplified, Colourful. It’s hard to pin it down to three words really.

Which colours do you find yourself drawn to?
It depends on really. I am currently in love with slightly dirty greeny yellows. But I’ve had blue periods, a pink period, an orangey yellow period and a green period. I’m constantly researching colours and playing with palettes and colour combinations, though, and try not to get too predictable with them.

Can we talk about your latest projects? I guess your latest client was Google Calendar and created some pieces for their new Google Goals feature. How did you get into this project? Take us through the process!
Well, they basically just contacted me saying they wanted me to do it. Which was cool. They’re a really nice bunch of people that I worked with. Super creative. Super nice. Super easy to work with. I had a surprising amount of creative freedom with the projects really, especially considering the client. They gave me the themes and a list of activities people had suggested for each theme, and I chose which characters I wanted to have a go at drawing and where I might imagine them. Then I kind of created the world for these characters, where you see recurring characters, and different people in love, or being parents, or neighbors to each other. Super subtle things that people probably won’t ever notice. But I like to add hidden details to stuff so that somebody can look at something for the nth time and see something new. There was naturally a little back and forth with each piece to get it so that everyone was happy with it, but yeah, it was a great fun project.

You also worked on Two Dots app, which is super cool, creating the visuals for the game. How did they approach you about working with them?
Technically I’m still working on it really. Working on it as we speak. Have been for about 2 years now. These guys are another great client. They were really keen to work with me from the get-go. I was ridiculously busy and they had asked me to do some pitch pieces to see if they wanted to sign me up for the app properly, but because I was so busy, I said no. They then extended the deadline for me and were super nice, so I had a go. All the finals I did weren’t quite right for the project, but they loved them, and so gave me a proper brief to work to. To start with I was basically just set free on a bunch of world ideas and could basically draw whatever I wanted. Which was ace. Any colours, creatures etc that I wanted. It’s become a little more pinned down as we’ve gone on because of specific game mechanics or trying to keep stuff on brand, but it’s still an awesome project to be part of. It helps that’s they’re all such decent people and we have such a good working relationship. 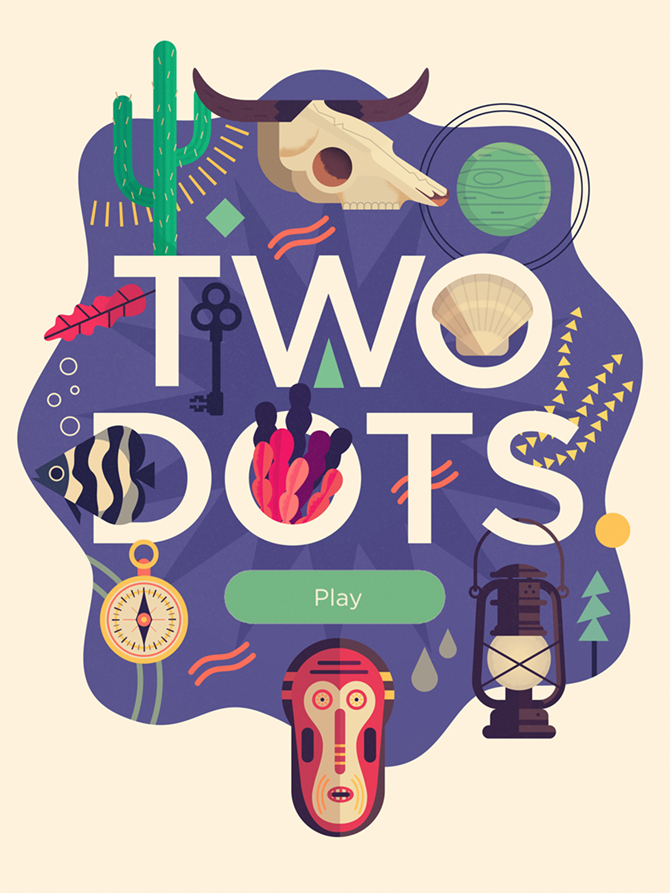 “Laika The Astronaut” that was the best gift I’ve ever got so far! 🙂 So, I would like to know more about this book. There were some complaints by people about the end of the book.  I also agree with you Laika deserved a happy ending…
Yeah this one was a tough one for me. Some people absolutely love my decision while others have been annoyed or disappointed by it.

Spoiler Alert: In real life, Laika died. In my book, I imagined that at the point that we thought Laika died, she had actually been saved by some aliens and taken in by a family. The poor dog had such a terrible time of it, I thought she would be worthy of having a happier ending. And there was a deeper element to it all. I was having a tough time with understanding the concept of death at the time. My Gramps had passed away, and yet when I thought about him in his chair snoring away, he was as alive as he ever was. If I’d have asked him in my head a certain kind of question, I know the answers he’d have given me. My Gramps is still alive in my head. He’s just permanently in the next room. That was how I felt Laika should be in the story. She’s no longer on this earth. She is elsewhere. So Laika is kind of dead in my story too, but going to heaven or whatever… and most importantly, happy!

The mixture of responses to the book has been a bit weird. It was the first time I received massive criticisms for me work, and some people were having a go about how it was lying to kids, and not pointing fingers enough at the Soviets etc. But in my eyes, this isn’t a non-fiction book. And hey, there’s lots of horrible stuff happening in the world every day. Isn’t it nice to try and put a positive spin on something?

Laika is based on a true story of a stray, living on the streets of Moscow who is chosen to be the first ever animal launched into orbit. 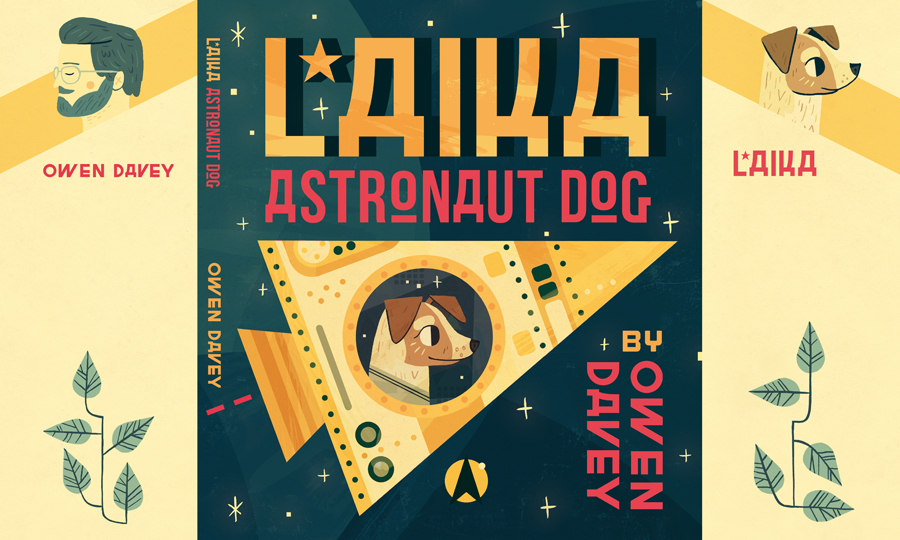 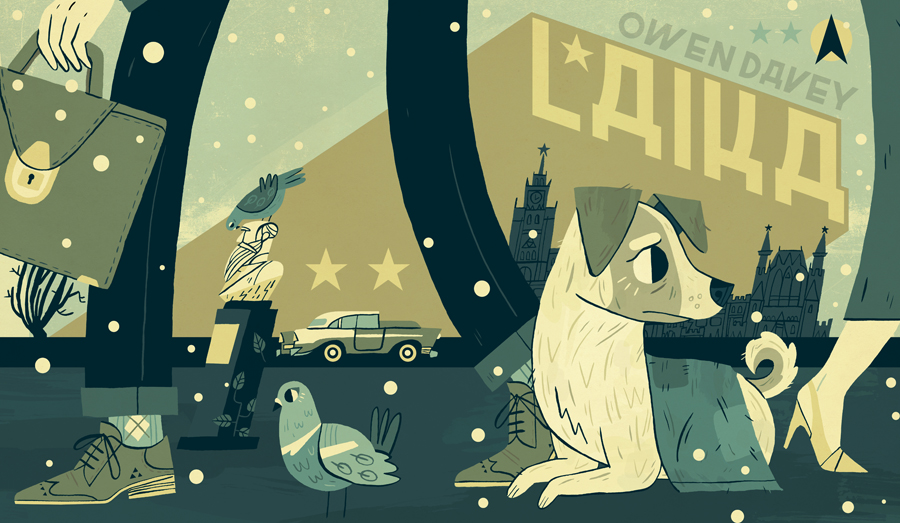 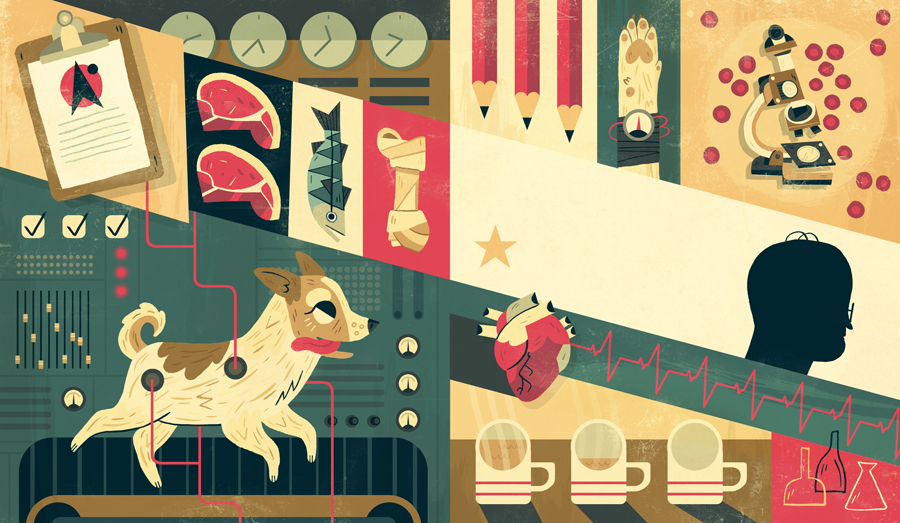 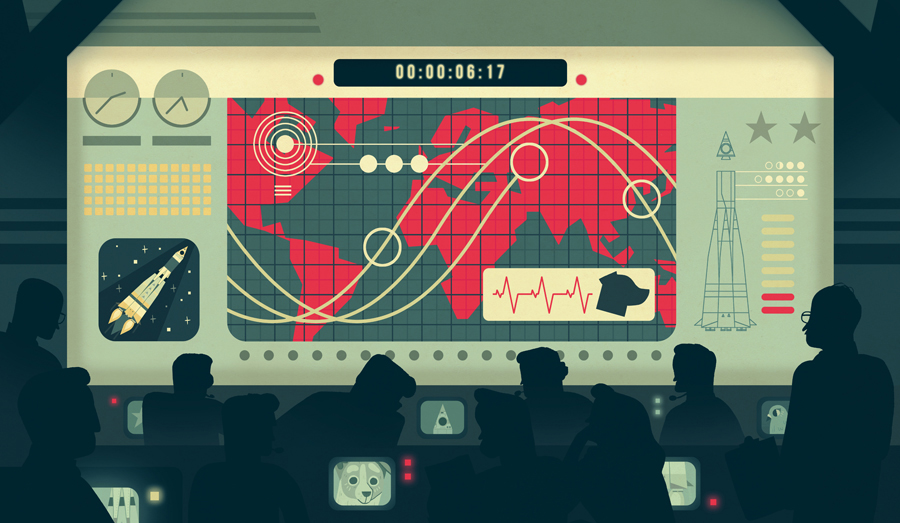 As a child how important were books to you?
Dunno really. I wasn’t a massive bookwork or anything but I have always enjoyed reading. It was often about the pictures for me though. I have always always loved illustration. It’s my first great love.

Do you have ideas for more children’s book?
Yeah loads. I’m working on a couple of them but it’s a difficult thing to find time for. 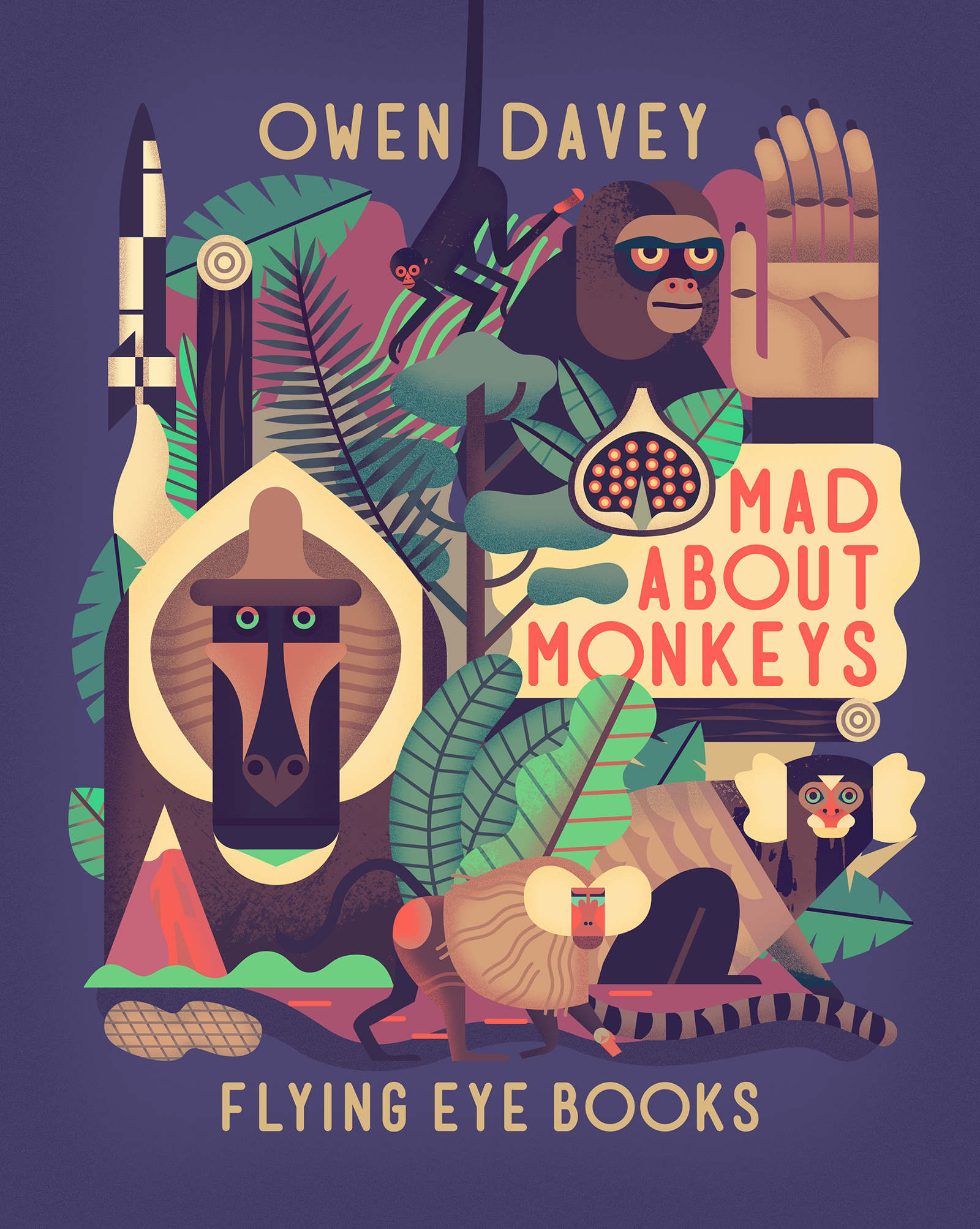 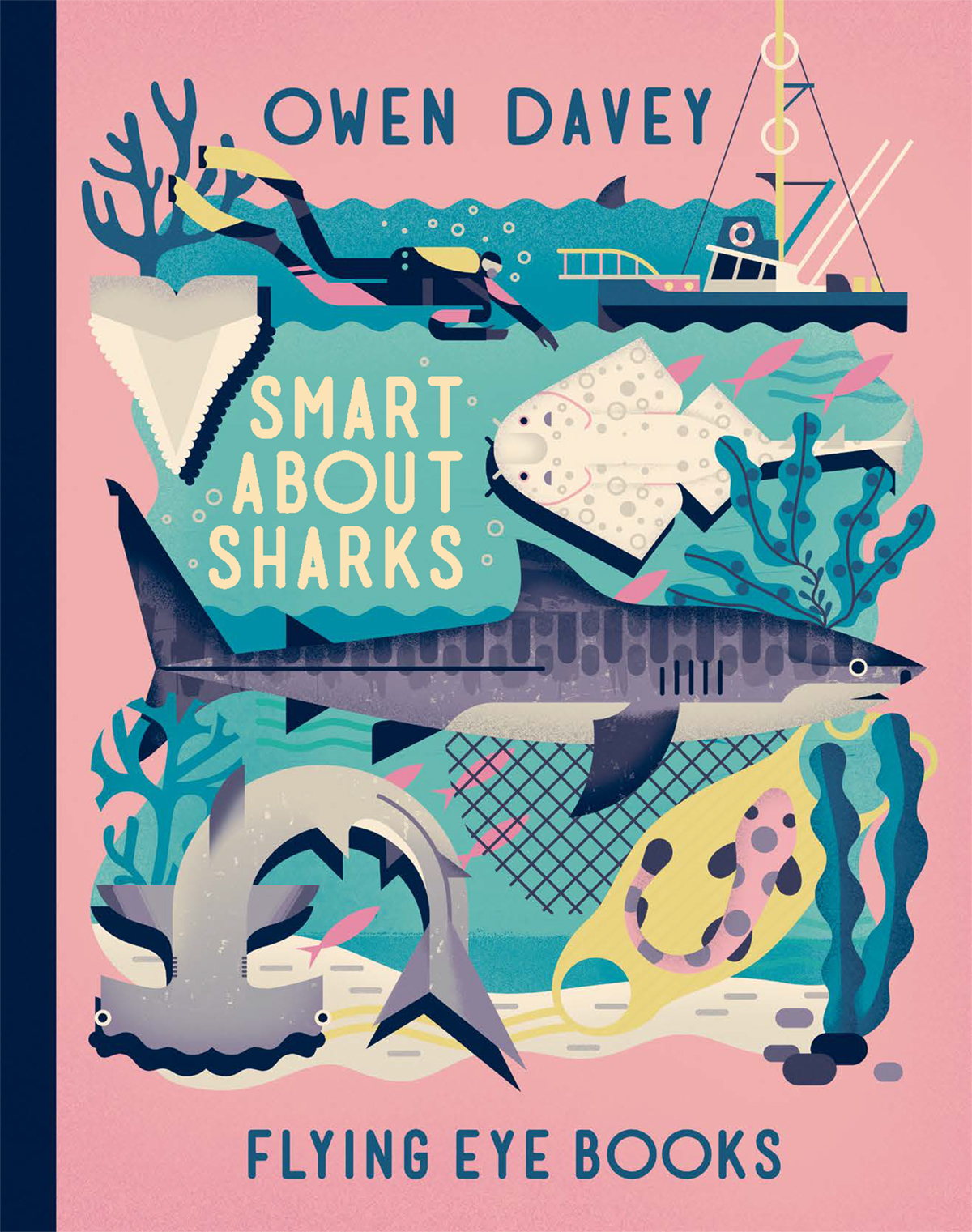 How do you keep yourself inspired?
Easy. Life. Sounds trite but it’s true. The world is amazing. Sure, there’s horrible stuff and some total berks living in it, but the world is amazing. Nature, animals, some people, space. It’s awesome. And endlessly fascinating. History is an amazing source of inspiration too. Everything that could have happened, has happened.

What does one need to be creative?
Imagination. A way of putting your own spin on the world around you I think. I think illustration is at it’s most interesting when you get a glimpse at how somebody might see the world. I think one of the most successful things about my own work is that way I decide how I’m designing an image. What geometry is used to interpret certain things, or what colours I’m using. You could give 10 illustrators the same subject matter, and could come up with some insanely different results. That’s fun!

What’s the best piece of advice you’ve ever been given?
I think my mum once said something like ‘don’t let people take advantage of your good nature’ once. Which was quite a useful one, especially when I’m trying to make a living out of a job I love. Some potential clients can try and pull one over on newly graduated students, and having a sceptical mind was useful at times.

Tell us something nobody knows about you…
People who don’t know me personally might not know that I don’t drink alcohol and have never been drunk. I don’t have an issue with it or anything. I’m more than happy for people to get wasted around me (they have all my life hehe). I just don’t like the taste. And don’t feel the need. I’m more than happy to go dancing or do something that scares me completely sober.